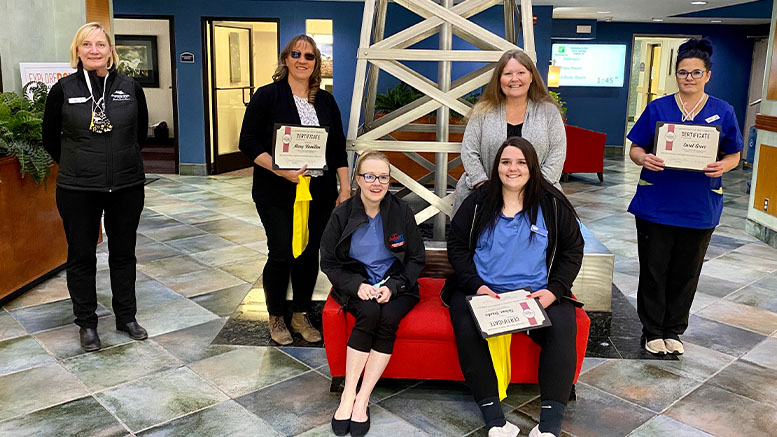 The quarterly R.E.A.C.H. Awards honor outstanding customer service provided by employees in the local tourism and hospitality industry that celebrate and enhance Sweetwater County’s reputation as a first-class visitor destination. Award winners serve as champions for the tourism industry. “SWCTT deploys a multi-media marketing and public relations campaign every year to generate tourism to Sweetwater County. Those efforts would be for not without the outstanding hospitality employees that we have in our area greeting and taking care of guests when they arrive. They are truly the backbone of the industry, treating strangers like friends and enhancing the visitor experience overall,” said Jenissa Meredith, Executive Director of Sweetwater County Travel and Tourism. 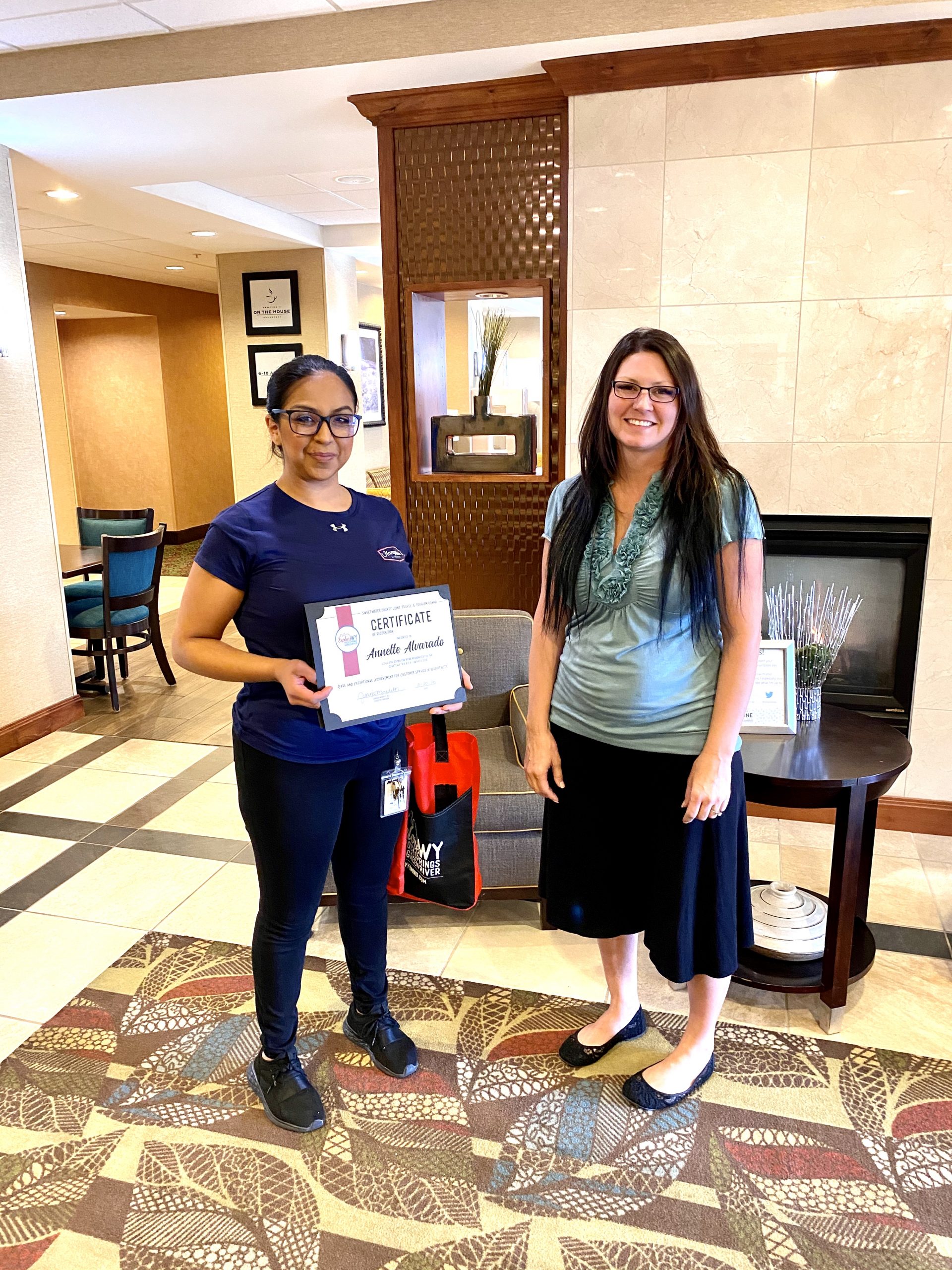 Trish Green, General Manager of the Quality Inn and Holiday Inn, nominated Mary Hamilton because of her flexibility, great attitude, and winning personality. During the onset of COVID-19 the hotel had to reposition some staff in order to keep them working, Mary approached her new and additional duties with a great attitude! “I want her to know how much I appreciate all she has done for us,” said Green.

Green also nominated Tatum Bowles because in the year and a half she has been with the hotel, she has never called off work, always does her best and has a positive, can do attitude. She is a hard worker, and a fast learner. She started in housekeeping and laundry, and since has moved to the front desk. Tatum is very nice and sweet to the guests and tries very hard to not get frustrated with the more challenging ones. “We are very lucky to have Tatum on our team,” said Green.

John Maple, General Manager for the Homewood Suites, nominated Angel Maldonado for his personal achievements and excellent customer service at the hotel. Angel started in Laundry/Housekeeping for the hotel working during the summers when he was out of school and some evenings after school. He was a very hard worker and always punctual and reliable. Angel was shy and quiet, but very friendly when spoken to. The hotel had a front desk position open a year ago and the housekeeping supervisor recommended Angel for the position. He was interested in the position but was nervous to work so closely with guests. Angel was offered the position and has had great success. Angel has become a fantastic front desk clerk and has a great rapport with the guests. John has received several compliments about him, and he continues to be the same hardworking, punctual, reliable employee he was in laundry. “I’m very proud of Angel and he is an extremely valued member of the Homewood Front Desk Team,” said Maple.

Maple also nominated Brenda Carrillo for her dependability, friendliness, reliability, and for going above and beyond baking sure the rooms are clean for guests. Brenda has worked in the housekeeping department for over three years and is a very valuable member of the Homewood Team. She works very hard and is very good at cleaning her rooms and taking on extra rooms and deep cleans when needed. “Brenda is a true asset to the hotel, and we are happy she is part of our team,” said Maple. 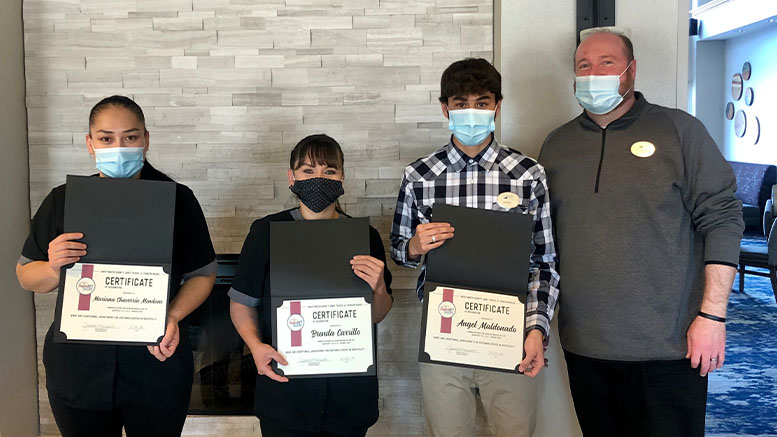 Maple also nominated Mariana Chaverria for being a fantastic housekeeper. Mariana has worked at the hotel for over three years and is always going above and beyond in her room cleaning and takes pride in her work. She is always willing to help out if called in and is very reliable and dependable. Mariana always has a smile on her face and is very friendly with guests and her co-workers. “She is very valued member of the Homewood Housekeeping Team and we appreciate all her hard work and dedication to the hotel,” said Maple.

Bridget Renteria, General Manager for the Hampton Inn, nominated Annette Alvarado for her personal achievements while working at the hotel. Annette has been an employee at the Hampton since she was in High School. At one point she left to go to school in Utah and came back as soon as an opening came available. “She has helped us in many areas and originally started as a night auditor. She then moved up from night auditor to day shift guest representative and then from there, was recently promoted to our Executive Housekeeper. She has done great so far tackling the back of house and managing her new role as a supervisor. We are very proud to have her on our team and have her continued support as well as her willingness to go further. We see many bright things coming for Annette in her future with a great hospitality career,” said Renteria.

Liisa Anselmi-Dalton, Owner of the Holiday Inn, nominated Carol Greer, Head Housekeeper for going above and beyond, taking on additional responsibilities, and helping coordinate remodeling efforts during the height of the pandemic. “Our staff was amazing and my head housekeeper, in particular, Carol, kept me sane.  She helped me decide which rooms to re-carpet and helped me organize the whole team and effort.  We even had the desk clerks cleaning the shower heads and such with vinegar in the lobby.  It kept us busy.  There were some fights, some exhaustion and some frustration, but we became a team.  Then July came and business started picking up.  Then we started filling up the rooms that were not down.  This was unexpected.  Now I said to my maintenance man, we have to get these rooms back online and you can say I told you so,” said Anselmi-Dalton.