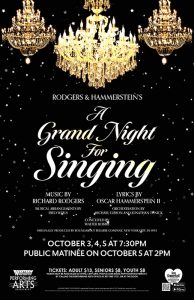 The show is a compilation of music and lyrics from the popular duo, Richard Rodgers and Oscar Hammerstein II. This musical revue features songs from the productions of “Oklahoma!” “South Pacific,” “The King and I,” and many other classics and lesser-known shows.

Assistant Professor of Musical Theatre Stephen Cramer is a disciple of Rogers and Hammerstein and thinks it is important to revisit the classics. He chose this musical to show young people, especially the students, that these classical musicals are always relevant.

“The show progresses through music.  This progression is shown through the show’s theme, which is based around relationships– how they develop through life, and how love can transform throughout time,” Cramer said. “I want the audience to relive their appreciation for this music. I want them to have a wonderful time at the theatre.”

“In addition, this musical will be performed in a thrust-stage configuration, giving the audience the feeling that they are right there with the performers in the progression of the show,” he added.

Although there are no characters, Cramer loves that the show gives the actors a chance to embody the characters within the songs and show.

Lynzi Johnson, a second year Musical Theatre major from Green River, said she “absolutely loves the music in it, the theme, and way it all progresses through the entirety of the show.”

“I sing a lot of songs about love and how my character is on this journey of finding love and finding who she is. I feel like I can connect to that because in college the whole purpose is finding out who we are. The show is about love and relationships; we grow together through the music and we grow individually, as well,” she said.

Justin Hardman, a second year Music major, is from Moses Lake, Washington, and will be onstage as the piano accompanist for this show.

“The show is like a journey, and as the pianist, I partake in every experience with each actor, especially on an emotional level, so by the end, my character has developed a new understanding of life and love,” he said.

“Instead of simply playing the notes on the page, I have put an emphasis on really listening to the actors and bringing out specific melodies, harmonies, and rhythms that complement the actors’ voices. It’s like I’m having a conversation with them through the piano,” he added.

Children under five are not permitted to the evening performances but are welcome to attend the Saturday matinee.

Tickets are $13 for adults and $8 for youth and seniors.