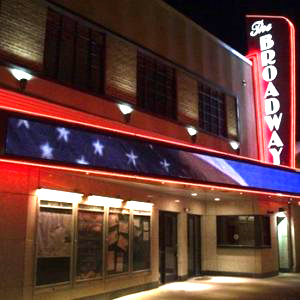 Rock Springs, Wyoming – The Broadway Theater is excited to announce the upcoming season’s line up.

According to Trina Brittain, Marketing Events coordinator, there will be no shortage in entertainment in Downtown Rock Springs. Chad Banks, Rock Springs Main Street/Urban Renewal Agency manager added that there is something for everyone in the line-up.

“We try to balance the schedule with a variety of genres and shows that will appeal to a broad range of guests,” Banks added.

Neil Diamond fans will agree that his songs are a big draw. Diamond is one of the most beloved performers in the past five decades. His music crosses generations of fans. Fans keep craving it. Jack Wright’s voice is remarkably similar to Diamond’s. His musical arrangements are authentic and powerful.

From Colorado Springs, this military ensemble will use the power of music to inspire the audience. The band presents more than 400 performances each year providing music for official military functions and ceremonies as well as civic events and public concerts.

Ahoy! Make plans to get the family together and see this amusing show. The Greatest Pirate Story (N)ever Told is Off Broadway’s improvised, interactive, musical pirate adventure filled with boatloads of laugh-out-loud moments for both kids and grown-ups.

The Plot:  Flung into the future by a musical-loving Sea Witch, a crew of misfit pirates-turned-actors must now perform the greatest pirate epic ever seen on stage. However, when their script is partially obscured by a tragic squid ink accident, the crew must turn to the audience to fill in the missing bits of the plot. Cast members improvise their musical adventure, seamlessly weaving the audience suggestions into scenes, songs and more. Full of swordplay and wordplay with a boatload of laughs for pirates age 4 to 104, this swashbuckling musical is never the same show twice.

Celtic Rock fans should mark the calendars for this one. The Young Dubliners is an American rock band from Los Angeles. They have released nine album by 2013. Their vibes are similar to bands such as Phish and Dave Matthews Band. Their repertoire consists mostly of original rock compositions and Irish folk songs with a rock twist. Their influences include Thin Lizzy, The Pogues, The Waterboys and U2.

Electroluminescent artistry will take the stage as Lightwire Theater presents A Very Electric Christmas. Lightwire Theater were the semi-finalists on NBC’s America’s Got Talent. They were winners of Tru Tv’s Fake Off. The group combines theater and technology to bring stories to life in complete darkness. The internationally recognized creators will make the evening a magical one.

For a very merry, honky-tonk, good time, get tickets to the annual, sold-out Bar J Wrangler Christmas Concert as soon as they go on sale. This world-famous sextet will perform holiday songs from yesterday and today. Their western harmonies and cowboy humor will whisk away the troubles and fill hearts with the joy of the season.

The holiday tradition continues at The Broadway Theater with two showings of The Polar Express. Families can enjoy this classic on Dec. 20 and 21.

Opera Wyoming returns to the Broadway Theater. After meeting in Casper, the group realized there was a lack of performance opportunities in their preferred mediums. Soon, they decided to create those opportunities for themselves and everyone around them. This dedicated group brings quality opera and musical performances throughout our state.

In addition to the Broadway Theater’s line-up, the Sweetwater County Concert Association will present two performances at the theater:

​The World-Famous Popovich Comedy Pet Theater is a family-oriented blend of the unique comedy and juggling skills of Gregory Popovich, and the talents of his furry costars.

Popovich Comedy Pet Theatre has been voted “Best family show in Las Vegas” and were finalists on America’s Got Talent. Comedy Pet Theater features an amazing cast of housecats, dogs, parrots…even geese and mice! Critics describe it as a unique blend of comedy, world-champion juggling, and the extraordinary talents of more than 30 performing pets. Gregory Popovich has rescued the animals from shelters all over the country and transformed them into Las Vegas stars, using positive reinforcement and working with the animals natural abilities to create a fun, one-of-a kind show.

Sundae + Mr. Goessl features award-winning vocalist Kate Voss (Earshot Magazine’s Vocalist of the Year, two-time Seattle-Kobe Vocal Jazz Princess) and tireless virtuoso guitarist, Jason Goessl. This charming wife/husband duo incorporates humor, vintage style, interesting instrumentation, nostalgia and serious chops in their act and were awarded Best Duo of 2017 from Seattle Weekly. Bringing back the sounds from a by-gone era and spreading the joy of music like Johnny Appleseed, this act can be described in a single word: delightful.

Those who appreciate The Broadway Theater are encouraged to sign up for the Friends of the Broadway patron program to help support events.

“We’re really excited about the variety of shows we’ve scheduled so far,” Banks said. “There’s something for everyone.”

“It wouldn’t be possible without our patrons and many underwriters,” he added.

The Rock Springs Main Street/Urban Renewal Agency is charged with the redevelopment of Downtown Rock Springs. As part of their mission, there are three standing committees – Business Development, Promotions and Arts and Culture.

For more information on the program, contact the Rock Springs Main Street/Urban Renewal Agency at 352-1434 or visit their website at downtownrs.com.