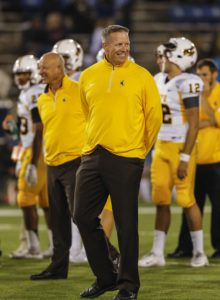 (Laramie, Wyoming) – University of Wyoming head football coach Craig Bohl announced on today that offensive coordinator Brent Vigen is being elevated to the position of Associate Head Coach.Â  The announcement was made at a noon press conference kicking off the start of Wyoming Spring Football.

Vigen took over as Wyomingâ€™s offensive coordinator and quarterbacks coach in 2014 and will enter his fourth season in that role in 2017, as well as adding the additional responsibility of Associate Head Coach.Â  He helped the Cowboys capture the 2016 Mountain Division title in the Mountain West Conference, earn a berth in the 2016 Mountain West Championship Game, defeat two Top 25 ranked teams along the way and earn an invitation to the 2016 San Diego County Credit Union Poinsettia Bowl.

â€œAs we move our Cowboy Football program forward, I feel it is critical Brentâ€™s (Vigen) role be enhanced for us to continue to be successful in the competitive Mountain West Conference,â€ said Bohl.Â  â€œBrent is an extremely capable coach.Â  Heâ€™s done a phenomenal job with our offense, and we look forward to him being more involved in other facets of our football program.â€

â€œI would like to thank Coach Bohl, Tom Burman and the administration here for entrusting me with the additional responsibilities this new title carries,â€ said Vigen.Â  â€œCoach (Bohl) has been great to me over our many years together, allowing me to grow in this profession.Â  Our family has really enjoyed our time here in Wyoming, and we are looking forward to continued success in 2017!â€

Vigen is entering his 20th year as a college coach and his ninth as an offensive coordinator.Â  He began his coaching career as a graduate assistant at his alma mater, North Dakota State, in 1998 after completing his playing career with the Bison in 1997.Â  He was elevated to a full-time coaching position in 2001.Â  When Bohl took over as head coach at NDSU in the 2003 season, Vigen was retained by Bohl.Â  He was elevated to passing game coordinator in 2004 and offensive coordinator in 2009.Â  Bohl and Vigen are entering their 15th season coaching together in 2017.