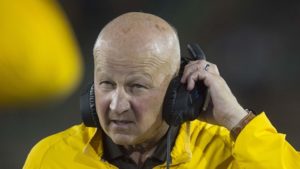 â€œToday was an opportunity for us to put our team in a game-like situation,â€ said Bohl.Â  â€œI donâ€™t think there were any injuries, so Iâ€™m always pleased about that.Â  There is nothing you can do to replicate those two-minutes drives.Â  Even though itâ€™s the Spring Game, those guys feel like its a real game, so I thought it was a really good evaluation tool”. Â Â [bsa_pro_ad_space id=7]

â€œSome of the observations I saw, I thought our offensive line did a good job at the point of attack.Â  I thought our running backs ran hard”.

“Both quarterbacks threw the ball fairly well.Â  It was the first time we were on the shot clock, so weâ€™ve got to manage our clock a little bit better.Â  However, I thought the two-minute drive at the end was encouraging”. (Nick Smith and Tyler Vander Waal rotated between both the Brown and Gold teams throughout the game.Â  Smith finished the day 8 of 12 for 96 yards, one TD and no INT’s.Â  Vander Waal was 15 of 23 for 129 yards, no TD’s or INT’s).

“What you saw today (from our running backs) were a lot of yards after contact,â€ said Bohl.Â  â€œI donâ€™t know what the stat sheet showed, but I felt we were moving the ball on the ground and created a lot of third down and makeables and that is a significant difference from where weâ€™ve been.Â  I thought the running backs ran hard, and I thought Nico (Evans) ran particulary hard.â€

“The kicking game needs to get shored up a little bit.Â  A couple of Cooperâ€™s (Rothe) kickoffs have got to be better than that.Â  It was encouraging to see him hit the winning field goal”.

â€œOutside of that, I thought a really good spring and weâ€™ve got to keep moving this program forward.â€