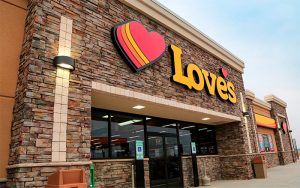 Sweetwater County, Wyoming — The Sweetwater County Board of County Commissioners approved a conditional use permit for Love’s Truck Stop to build at the west end of Jamestown.

The commissioner’s decision on Tuesday was unanimous.

After the commission’s approval, Van Dyke said the company plans to begin construction mid-April of 2020 and will likely finish in about eight months.

He also said the two likely candidates for the fast food restaurant will be Arby’s or Carl’s Jr., though that decision has not yet been made.

Before the commissioners’ vote, a public hearing was conducted. Heard from was one Green River resident who spoke against the travel center and two who spoke for it.

Dallas Koons brought photos of the Love’s Travel Center in Wamsutter, showing trash around that site. He also said the study conducted by the Wyoming Department of Transportation on the on- and off-ramps was done on dry roads and did not address the ice and snow the area gets during the winter.

Koons also noted the traffic congestion that could occur along Highway 374 if Interstate 80 shut down in bad weather.

Kael Jasperson with the Jamestown Water District spoke in favor of the truck stop, although he admitted it was not on the top of list for development in that area. He did not think traffic would be a problem because large trucks use Highway 374 all the time anyway.

He also said I-80 closures are “a fact of life” and something that must be dealt with regardless of the traffic it may cause.

“Growth is needed in that area,” Jasperson said, adding that Love’s will bring some much-needed mid-level jobs to the area.

Stewart Groh also spoke in favor of the travel center. He noted there are truck stops at all entrances in the major cities along I-80 in Wyoming; Green River right now is the one exception.

Groh also said Love’s will bring services to Jamestown that are not currently there, such as a convenience store, a fuel stop and a restaurant.

Commissioner Lauren Schoenfeld asked what Love’s plans on giving back to the community. Van Dyke said that at the ribbon cutting the company will donate $2,000 to Jamestown. Also, the money it raises for its biggest fundraiser, The Children’s Miracle Network, will stay local.

Johnson voiced concern with Love’s Travel Center in Wamsutter and the trash that was pictured in that area. Commissioner Rand Wendling said the Wamsutter Town Council is in contact with Love’s and is working to get the trash problem resolved.

Van Dyke assured the commissioners that Love’s works hard to keep its lots clean. At the Jamestown site, fencing will be used to screen the receptacle area and help catch trash the blows in the Wyoming winds.

He also said Love’s septic system will be state of the art, if it is approved by DEQ.