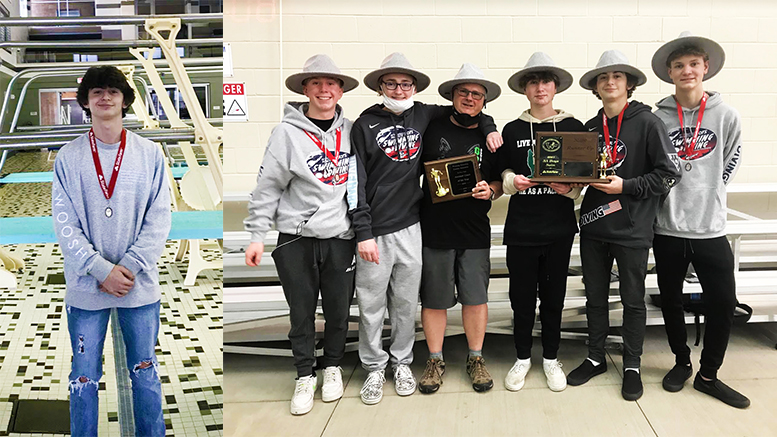 GREEN RIVER, WYOMING (February 23, 2021) – Green River High School sophomore diver Braxton Cordova took first place at the 3A State Meet this past weekend and his coach Rick Barker was recognized by his peers and earned 3A Assistant Coach of the Year.

“It’s pretty exciting. I had some hopes of accomplishing it at the beginning of the season and it ended the way I wanted it to, so that was pretty cool. It was a lot of dedication, making it to practice on time and working hard for three months to actually achieve that goal,” Cordova said.

Barker has been with the program for about 38 years. He’s been the diving coach for the past six and he said he’s excited about earning the award.

“I had a real good group of divers this year that helped considerably make me look really good,” he said. “They did the work, but I’m really pleased when that happens. It’s nice to be elected by your peers and stuff.”

Barker said he was proud of Cordova for reaching a goal he had made for himself at the beginning of the season.

“It felt really good to have a state champion who stepped up and knew what he wanted to get and achieve his goals,” Barker said. “We worked on the degree of difficulties, the positions and the finer points.”

Cordova has been diving since he was in the sixth grade and has been dominating the sport ever since. In the seventh grade, he broke the Lincoln Middle School diving record, which was originally 156.25. He broke the record in five dives with a score of 156.95. In eighth grade, Cordova bested himself and broke his own record with a score of 170.35.

Overall, the Green River Wolves placed second at the state swim meet. Cordova said that it took hard work and dedication for the team to reach a Top Two finish.

“We started off looking pretty good. We didn’t have the numbers we wanted to have, but we just kept going to every meet and focusing on every dive and every swim and just went from there until state,” he said.

Barker said it was “extremely rewarding” to watch the team grow over the course of the season and make an impact at the state level.

“The hours all the kids put in together to get where they wanted to end up,” Barker said. “We had all of our swimmers step up and do a really nice job of getting what they needed to do, as well as the divers. It took everybody on our team to get where we wanted to be this year. We did that. We had a lot of personal bests throughout the year.”

With five divers returning to the team next season, Barker is anticipating a bright future for the program.

“We’re going to continue to work and improve. The group of divers, I had three sophomores, a freshman and a junior on the squad. Five kids that placed in the Top 12. We’re looking forward to the ability to hang on and build on where we’re at,” Barker said.

“Swimming program is the same way. We’re graduating a good chunk, but we should be able to work hard, improve and replace those kids to get back to where we were.”