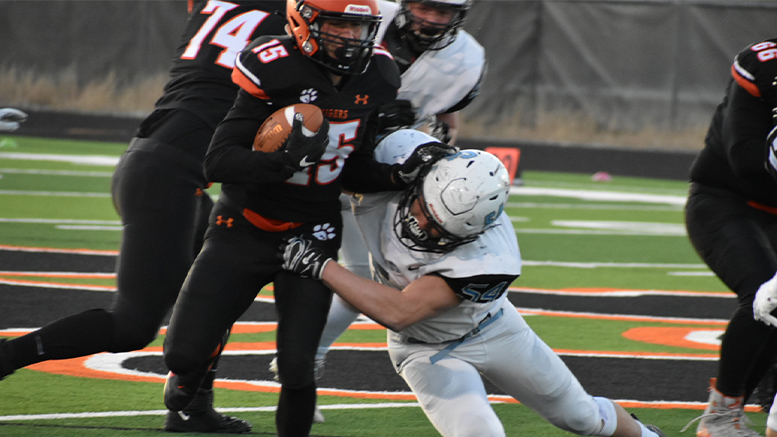 The Tigers committed three crucial turnovers in their 44-26 loss to the Cheyenne East High School Thunderbirds to end the regular season.

“When you play an offense like that, you can’t turn the ball over and we didn’t tackle very well tonight. Some of the things we’ve been doing well, we didn’t do well tonight,” said Rock Springs Mark Lenhardt.

“Three turnovers. I know we moved the ball well and had some things going, but we can’t make those kinds of mistakes.”

The Tigers did do a good job at moving the ball down the field, putting themselves in position to put touchdowns on the board, but came away empty handed with interceptions.

The Thunderbirds opened up the game with a 31-yard touchdown pass to take the early lead with 8:34 to go in the first quarter. The Tigers responded well, but with just about two minutes left in the opening period, junior quarterback Brock Bider found himself under pressure and forced a throw that was picked off in the red zone.

Cheyenne East extended its lead to 14 about midway through the second period. The Tigers managed to cut the deficit minutes later when junior Isaac Schoenfeld rushed for a 51-yard touchdown to make it a 14-7 ball game.

With 1:20 remaining in the first half, Bider took a deep shot down the middle of the field. The pass was picked off around the 24-yard line and the Thunderbirds responded by connecting a field goal as time expired.

In the second half, The Tigers controlled the clock, chipping away nearly nine minutes off the game clock by running the ball. Rock Springs ended the opening possession of the third quarter with a touchdown pass play. With 3:36 to go, Bider found Schoenfeld for the 22-yard touchdown. The extra point attempt was no good, but the Thunderbird lead was cut, 17-13.

But East marched down the field and connected on a 32-yard touchdown pass play to push its lead back to double digits, 24-13. 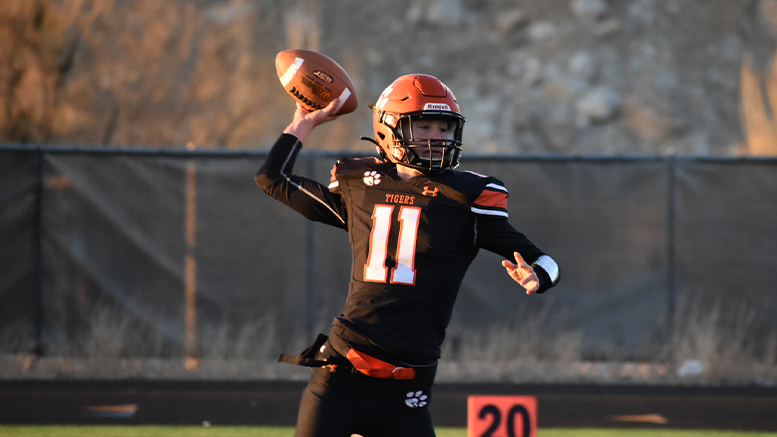 The Tigers opened up the fourth quarter with another solid offensive possession, but for the third time in the game, the ball was turned over deep in the Thunderbirds territory. Junior running back Jacob Eddy had a nice gain to the 26-yard line only to have the ball stripped and recovered by East with 11:14 left to play.

Less than a minute later, the Thunderbirds found the end zone again to push their lead to 17 points, 30-13.

The teams exchanged touchdowns the rest of the way.

With just over four minutes left, Bider found junior wide receiver Andrew Skorcz for the 29-yard touchdown to keep the Tigers in position to escape with the victory, down 37-26.

But the Thunderbird offense continued to roll and scored another touchdown with 2:27 left to seal the win. 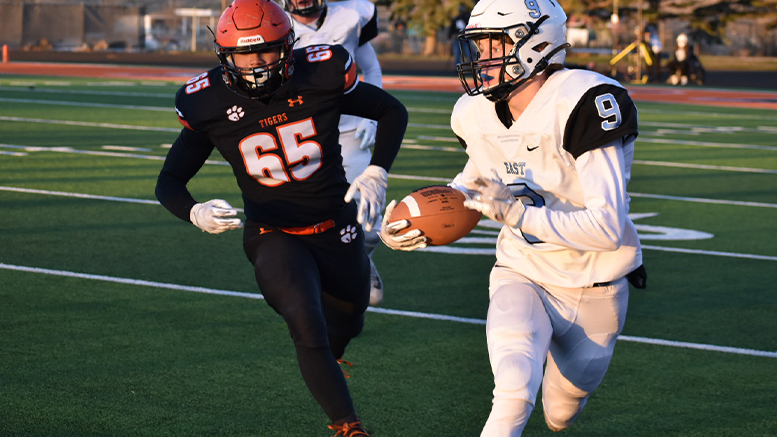 With the loss, the Tigers finish the regular season with a record of 5-4.

“It’s been a season of ups and downs but I’m proud of our effort and how hard these guys have played. It’s stuff to talk about it right now, but we’ll get ready to play next week,” Lenhardt said after the game.

Rock Springs will face the Sheridan High School Broncs in the opening round of the playoffs next week. The Tigers are familiar with the Broncs having played them earlier this season and losing 42-12 before rattling off four-straight wins.

“We’ve got our work cut out for us next week,” Lenhardt said. “We did a lot of things well tonight. Most definitely going to be one of those things where we go back to the drawing board and put this game behind us and move into our next season.

“I think more than anything, these are kids and they’re resilient. They’ll bounce back. We just got to play a little bit better and mistake free.”