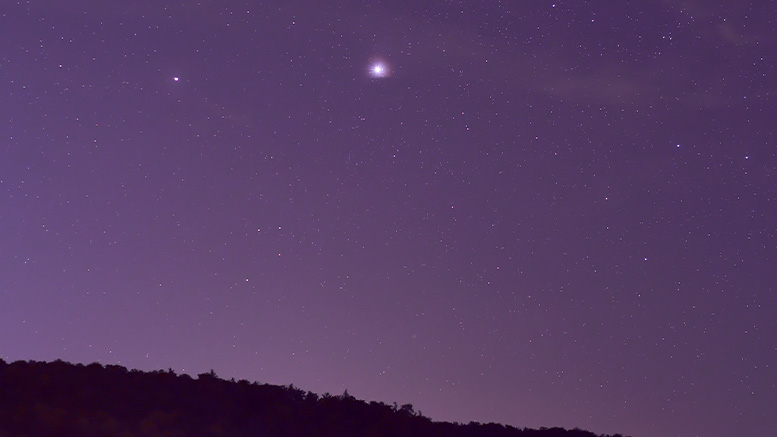 According to astronomers, the solar system’s two biggest planets (Saturn and Jupiter) will align in what is known as the “great conjunction.”

This rare celestial dance hasn’t happened in nearly 400 years and may not happen again until 2080. According to Forbes, it will be their closest alignment since July 16, 1623, but that one was too close to the Sun for anyone to observe.

The last alignment as easy to see as the “great conjunction” of December 21, 2020, was way back on March 4, 1226, when the two planets appeared to be just one fifteenth of the Moon’s diameter apart.

It will all happen just after sunset in the southwestern sky on December 21, 2020 and will take place low to the horizon. There can be no wasted time because the two planets will sink below the horizon about two hours after sunset.

Due to the timing of the event happening on the week of Christmas, many biblical historians believe that this alignment created the star that led the three wise men to the newborn Jesus, Mary and Joseph.

However, Eric M. Vanden Eykel, someone who is a scholar of early Christian literature in writing about the three wise men, said that the great conjunction is highly unlikely to be the Star of Bethlehem.

“The biblical story of the star is intended to convey theological rather than historical or astronomical truths,” he wrote.

Vanden Eykel argues that Matthew, the prophet who wrote about the Christ’s birth – specifically the wise men following a star to his exact location – was a symbol of a ruler coming to power.

“In the biblical book of Numbers, for example, which dates to 5th century B.C., the prophet Balaam predicts the arrival of a ruler who will defeat the enemies of Israel,” he wrote. “’A star shall come out of Jacob, [meaning Israel]…it shall crush the borderlands of Moab.’”

While Monday’s great conjunction probably is not the star that resembles the Star of Bethlehem, the awe it inspires is fascinating for those who anticipate it.

This article took information from Forbes, Times of Israel and The Conversation. Click the links to read the original stories