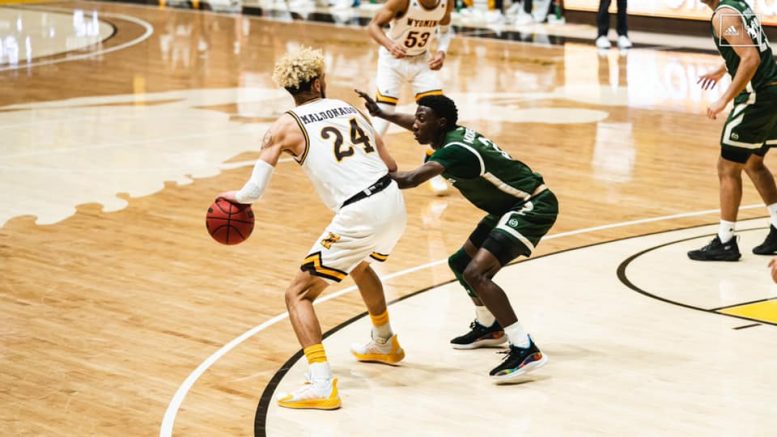 February 5, 2021 — What would have been a couple of nice wins over teams at the top of the Mountain West standings, and well as some rival bragging rights, turned into losses for both the Wyoming Cowboys and Cowgirl basketball teams Thursday night in Laramie and Fort Collins. The Cowboys fell in the last seconds 74-72 in Laramie, while the Cowgirls comeback fell short in Fort Collins, losing 69-61.

Cowboys vs. CSU: The Wyoming Cowboys dropped a 74-72 heartbreaker to Colorado State as a field goal in the Rams’ closing seconds proved to be a winner.

Wyoming tied the contest at 72-72 on a three-pointer from freshman Marcus Williams with 12 seconds remaining, but the Rams John Tonje made a layup with just under six seconds left to give CSU the lead and the game.

“We had some really good looks down the stretch, but hopefully, the next time, we won’t put ourselves in that situation if our defense can get a little better,” said Wyoming head coach Jeff Linder. “Our guys did play hard, and we talked about being Cowboy Tough.”

Wyoming and Colorado State wrap up their season series on Saturday. Tipoff is scheduled for 4 p.m. The game will be broadcast on WyoRadio’s 99.7 JACK-FM and streamed at 99KSIT.com beginning at 3:30 p.m.

Cowgirls at CSU: The Wyoming Cowgirls came up short Thursday night in Fort Collins, losing 69-61 to the league-leading Rams. The win was the sixth straight for the CSU ladies.

The Cowgirl trailed 39-26 at the half, and after each team scored 13 points in the third quarter, still trailed by 13 going into the final quarter. Wyoming would cut the lead to eight, 61-53, with 3:35 to go, but CSU would hold off a Cowgirl comeback for the win.

The Cowgirls are now 8-8 on the year and 6-7 in the Mountain West. Colorado State lifts their record to 13-2 overall and 9-2 in conference play.

The Cowgirls will look to avoid the sweep Saturday afternoon in the second game of the series with the Rams, tipping off in Fort Collins at 1 p.m.