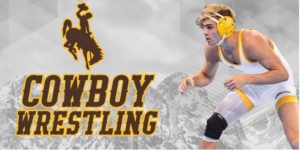 Cheyenne, WY – The University of Wyoming wrestling team won five matches, including four upsets on Tuesday night, but dropped a Big 12 dual to No. 3 Oklahoma State in Cheyenne 20-15.

To close the night, Bridges defeated No. 3 Kaid Brock, while Meredith upset No. 1 Dean Heil to send the crowd of 2,580 home on a good note, but the defending Big 12 champions picked up three bonus-point wins during the contest to help take the victory. The loss was UWâ€™s (1-2, 1-1 Big 12) first in Big 12 action this season.

â€œCheyenne showed up tonight and our guys could feel it,â€ Branch added. â€œI loved the way we started the dual, and it really showed we can fight and compete with the top teams out there. It burns because we were close. We have a number of things to look at and go from there. Outside the loss, tonight was tremendous. It was great to see the hometown kid get that victory. The support this program gets from around the state is unbelievable.â€

Saving the most anticipated matchÂ for last, Meredith, a Cheyenne native, fed off the unbelievable atmosphere of Storey Gym to upset the defending two-time NCAA Champion.Â  The win was the first for Meredith over the All-American and also the first loss for Heil in 55 matches.

Meredith, a two-time All-American himself, gave up an escape in the first period and followed with an escape of his own in the third. With less than 20 seconds left in overtime, Meredith picked up one final escape to hold on for the 2-1 victory. It was the third-straight win over a top-5 opponent for Meredith, and the eighth over a ranked opponent this season.

After tonightâ€™s exciting dual and a bit over a break for the Holidays, Wyoming will take to the mat after the New Year at the North Carolina Duals. The Pokes are set to compete against North Carolina, Duke, Army and American on January 5th in Chapel Hill, North Carolina.