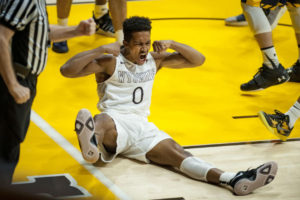 The season gets real for the Wyoming Cowboys tonight as they open Mountain West Conference play against San Diego State in the Arena-Auditorium.Â  Game time is set for 7:00 pm.Â  The game will be broadcast on WyoRadio’s 99.7 JACK-FM beginning at 6:30 pm and streamed at 99KSIT.com.

The Cowboys come into tonight game at 9-4 while San Diego State is 8-3 in the conference preseason.Â  The Aztecs are coming off a 72-70 win over number 12 Gonzaga on Dcemember 21st.

San Diego State is led in scoring by Devin Watson at 13.1 points per game. He also leads the team dishing out 41 assists this season with 17 steals.

Tonight’s game marks the 81st meeting between the two schools in a series that dates back to 1979. The two teams met once last season with the Pokes falling to the Aztecs in San Diego by a score of 77-68.Â  Wyoming is 26-10 against the Aztecs in Laramie.