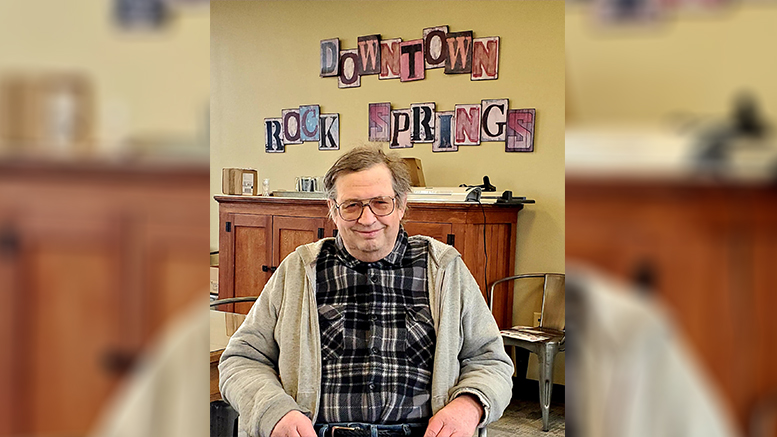 Murray was instrumental in preparing the fourth annual Holy Thursday Downtown Religious Pilgrimage. About 60 people strolled through Downtown on April 1. They made frequent stops in front of historic buildings such as the Broadway Theater and Rock Springs Historical Museum and listened to scripture readings from various church representatives.

Murray was living briefly in San Antonio, Texas after his MBA graduation. It was there when he noticed a Downtown Pilgrimage on Holy Thursday before Easter.

“It drew a huge crowd to downtown,” he observed.

After retiring from the Rocket-Miner Newspaper, he felt that something similar would work in Rock Springs.

“Of course, the goal of the Rock Springs URA is to draw people Downtown to discover and visit the many fine shops, restaurants and businesses which we have Downtown,” Murray pointed out. “I felt that as a volunteer with the Arts & Culture Committee, I could suggest the Holy Thursday Downtown Interfaith Pilgrimage as a method to draw people to our Downtown, including (but certainly not limited to) people who might never come Downtown for an art festival, a farmer’s market, or a parade.”

He added, “We hope that people will consider Downtown shopping before they spend the gas money to drive to Salt Lake, Casper, Cheyenne, etc. to do their shopping and dining.”

Murray is excited to see the traffic and ongoing progress in Downtown.

“I like the way our Downtown is tidy-looking, not run-down and looking like its best years were long ago,” Murray shared. “The well-kept-up appearance of the businesses Downtown bespeaks of the financial success of our Downtown businesses and their continuing viability.”

Murray added, “This contrasts with downtowns in other places that look like un-restored ghost towns.”

Murray hopes more locals will be willing to volunteer in upcoming events and projects, especially now that summer is around the corner.

“Volunteering with the Rock Springs Urban Renewal Agency is a rewarding experience for anyone who wants to have a positive impact on our Downtown environment and help to preserve it for future generations,” Murray expressed. “I particularly think that high school and college students could benefit from volunteering with the URA.”

“Assisting with URA projects designed to enhance community and business development would represent blue-ribbon bullet points on a resume!” he pointed out.