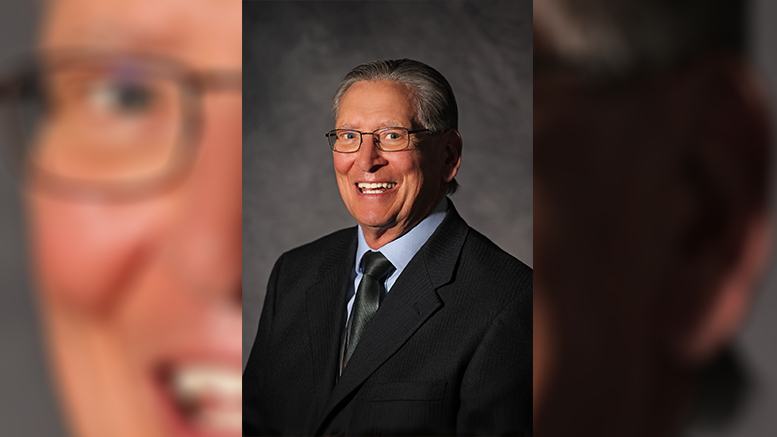 Rock Springs, Wyoming(June 7, 2021) — After serving five years on the Memorial Hospital of Sweetwater County Board of Trustees, Richard Mathey did not reapply for a second term.

Mathey, the board vice president, has said his drive to serve as an MHSC trustee came from his understanding that healthcare is a vital part of this community. He wanted to help it thrive. When a board position opened up, he thought it was a good fit.

His fellow trustees say it was the perfect fit.

“Richard will most definitely be missed at MHSC,” said Taylor Jones, president of the MHSC Board of Trustees. “Richard has been an extremely valuable member of the MHSC Board and contributed in countless ways. His guidance over the last several years helped put MHSC in the great position we are currently in and helped position us for the future.  I wish Richard the best in his retirement and new home in Fremont County.”

Mathey was presented with a canvas photo of the hospital and trustees, and a gift from the board during Wednesday’s meeting.

“It has been a privilege and an honor being able to work with Richard over the past five years,” said CEO Irene Richardson. “His leadership and commitment to the hospital truly helped us improve in many ways. His new perspective and vision helped to set us up for success in the future. He will be deeply missed, but I wish Richard and Randy the best in this new chapter of their lives.”

Mathey was appointed to the board in July 2016, serving as president for the first three years. He has since served as the board’s vice president. His term ends June 30.

He brought to the table a deep and extensive knowledge of governmental, administrative and tax law. He also represented area government agencies including the Joint Powers Water Board, Sweetwater County Child Developmental Center and STAR Transit.

Mathey has lived in Wyoming for more than 60 years. He and his wife, Randy, moved from Laramie to Green River in 1977. That same year, he began practicing law in Sweetwater County, opening Mathey Law Office in Green River. He retired in 2019. They now plan to make their home in Fremont County.

Sweetwater County Commission Chairman Richard Wendling on Tuesday thanked Mathey for all of his years of service on the hospital board and the many boards he has served on, along with the work he has done for the county.

The Sweetwater County Board of County Commissioners on Tuesday unanimously appointed Kandi Pendleton to a five-year term on the board. Several area residents had applied to the county to fill the seat. In April, the county commissioners voted to recommend Pendleton to the board so she could be mentored by Mathey and get a head start on learning all she could about how the hospital operates.

“I’ve heard nothing but good things about Ms. Pendleton, the work she has done already and her attentiveness,” County Commissioner Jeff Smith, MHSC liaison, said during Tuesday’s commission meeting.

“I gladly welcome Kandi to the MHSC Board,” Jones said during Wednesday’s hospital board meeting. “Kandi brings great qualities, knowledge and leadership, and will be a true asset. MHSC will be a better place having Kandi involved.”

Pendleton, the Marketing/Events Manager at Sweetwater Events Complex, begins a five-year term July 1. She will take the oath of office during the trustees’ July 7 meeting. A new slate of officers will be elected at that time.

For more on the MHSC Board of Trustees and all Sweetwater Memorial has to offer, go to sweetwatermemorial.com.