ROCK SPRINGS, WYOMING (December 12, 2020) – One Rock Springs man was arrested at the Rock Springs Family Recreation Center on Saturday during a protest against the statewide and countywide mask mandate.

During a discussion with Mayor Tim Kaumo about the rules that are in place about wearing a mask in public buildings, the man said, “F**k you,” to the mayor, which led to his arrest for what Rock Springs Police Chief Dwane Pacheco called a verbal disturbance or breach of peace.

“We can talk peacefully, but once you create a verbal disturbance or breach of peace, that’s going to insight a lot of people. That’s why those laws are on the books, so we can take care of the problem. We policed a level of probable cause that a person committed a crime or that a crime was committed and that person committed a crime. He’ll have his day in court. He was arrested, so he can post a bond and go to court or he’ll go to court and not post a bond. He’s now in the system,” Pacheco said. 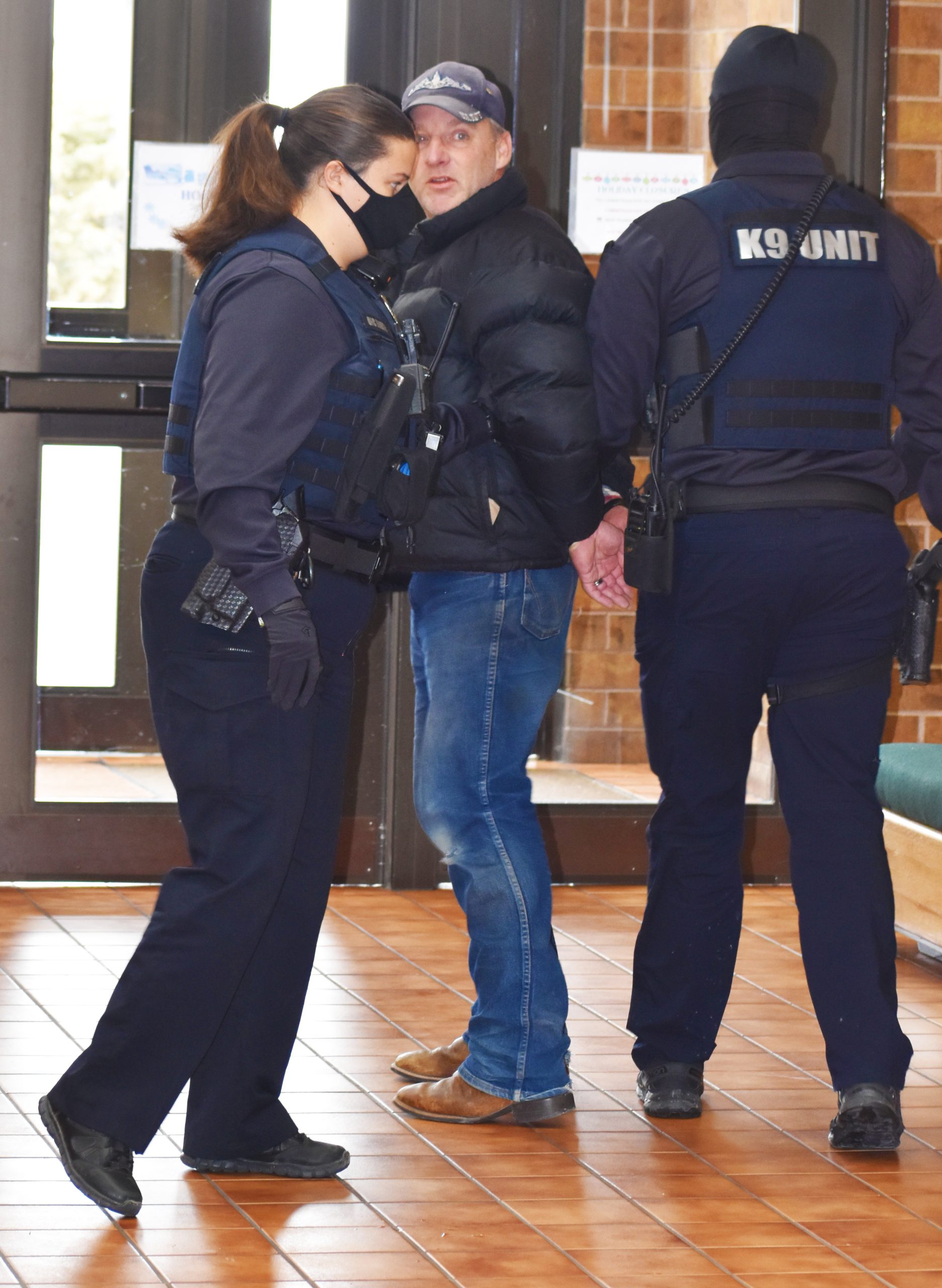 “Is he guilty? That’s up to a judge or a jury to decide. We did our job and remained peaceful after he was taken away. That’s all we want. We want a peaceful discussion. We want people to be able to give us their opinion, to follow the rules and then we press on to the next call. That’s why my officers are here and why I felt it was important for me to come out.”

Other than that particular incident, the planned protest against the statewide mask mandate was peaceful.

Maria Crisler, a clinical laboratory scientist holding the credential through the national certification agency for medical laboratory personnel, said the protest was designed to begin a conversation and begin the process of having a sit-down conversation with the mayor and other elected officials “so that we can have a collaboration about the truth about what the masks are actually doing to people personally.”

“We’re going to talk about first, do no harm, which is our right not to have to harm ourselves anywhere we go. It’s not even about the constitution. We can’t be forced to harm ourselves. My position is that I’m going to prove to them with over 220 scientific references that what is happening is actually hurting people physically,” she said, adding that one of the diseases that wearing a mask can cause is pulmonary fibrosis.

“We just have to have more education about it and be able work together to do better for people because this isn’t good.”

Her husband Duane Crisler said the public is not receiving the full information about wearing the masks from public health officials.

“There’s so much information that needs to be shared with the dangers of wearing a mask versus the supposed protection it gives. Basically, the mask causes lack of oxygen, too much CO2 in your blood and those create further complications that, at the end of the day, is going to make us sick. It’s detrimental to what we’re actually trying to use it for,” he said.

“I felt that this was an opportunity to start growing the community effort to have a public discussion about this mandate. We don’t agree that the mandate is substantial in science based on real evidence.” 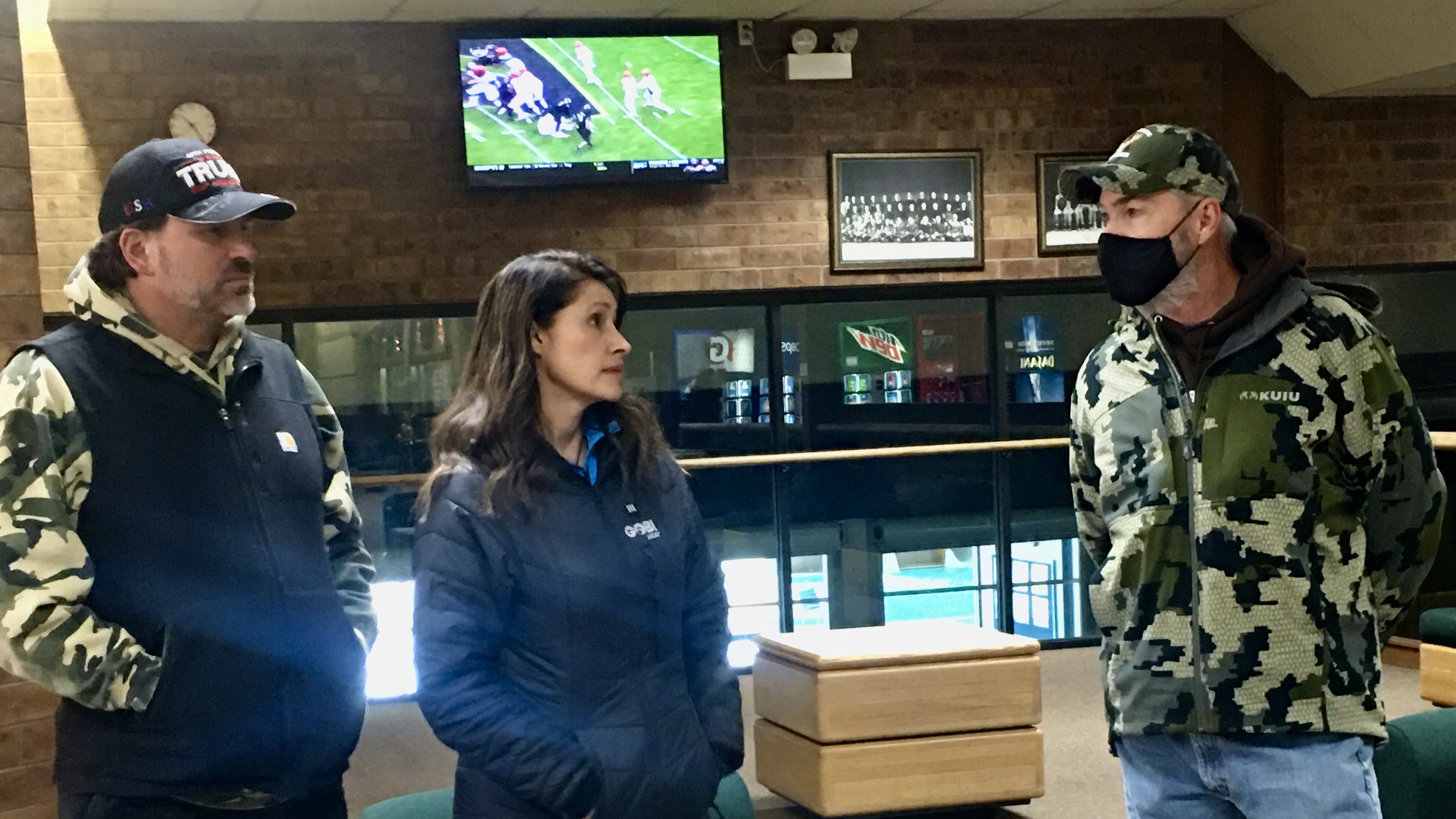 Mayor Kaumo called the protest, once it became peaceful, was “fantastic.”

“I think people have their rights. They want their voices heard. We, as elected officials, have the responsibility to listen to everyone. Right now, the policy in public buildings is a face covering, so we don’t have to shut down essential services to an entire population. But I think it was fantastic. I commend those people coming out. It was a great conversation and we’ll move forward with further discussions,” he said.

The mayor added that doesn’t disagree with people being opposed to face coverings and that the city will move forward with discussions with Green River, Sweetwater County Commissioners and the public to figure out common sense ways to enforce statewide health orders.

Crisler and Kaumo also agreed to a workshop to discuss the mask mandate and why she believes they cause more harm than good.

“I think a workshop is good. We can have everybody present their information and maybe we can make decisions forward that make sense for the entire community. Our goal is to make sure businesses stay open and people stay healthy, so we can eventually turn to our normal way of life,” Kaumo said.

That workshop will be announced at a later date.

Because it was a planned protest, officers made sure to be at the recreation center as a precautionary measure. Robyn Rasmussen, the recreation center superintendent, said that the rules are that a mask must be worn entering and leaving the building, and while an individual is not working out. A person does not have to wear a face covering while they are exercising.

“I asked them to wear a mask and if they refuse to wear a mask, then I say, ‘Well, then you can’t be in the building and you need to leave.’ If they don’t leave, then my follow up is that I need to call the police because, at that point, it becomes a trespass issue,” she said.

“It’s all in a day’s work for my guys,” Chief Pacheco said. “Our objectives is to go home safe at the end of our shift, but to also protect and serve the public. If it was at Walmart, it would be no different.

“It’s about the rules of being where you’re at. I’m happy to put on a mask to run into Smith’s to grab a gallon of milk if I need it. I’m also happy to wear a mask if it’s going to protect somebody, even if it’s just 3% or whatever these numbers I’ve heard. I’m good with that. But I’m also happy when I leave to take it off.”

Other than the verbal disturbance or breach of peace arrest, there were no citations given during the protest.