Rock Springs, Wyoming — A group of firefighters riding for R.I.S.E made a stop in Rock Springs on Thursday, Sept. 12. This is one of several stops on their 1,600 mile trek from Seattle and ending at the Fallen Firefighters Memorial in Colorado Springs, Colorado.

They ride on behalf of the Gary Sinise Foundation. For them, it’s about giving back.

The group of bicyclists stayed overnight at the Rock Springs Fire Department Headquarters. Early Friday morning, they were busy packing their gear and getting ready for another day on the road but took the time to talk with Wyo4News about the trek and why they do it.

Engine Company Lt. Tom Sowards of the Renton Regional Fire Authority in Renton, Washington, acted as spokesman for the group Friday. He said some members of the group do it for the adventure — and he admitted he would be lying if he said he didn’t also enjoy the adventrue — but all of them can agree they ride mainly to give back to the veterans who give so much so that we may have so much.

Soward is a Navy veteran who served on the battleship New Jersey during the first Gulf War. He said he was lucky to go home from that conflict in one piece, an opportunity some other service members did not have.

He knows how lucky he is, and that is why he does what he does.

Soward’s inspiration is Nick Kimmel. He said this veteran’s story propelled him on this path, as it did many of the other riders.

USMC Sgt. Nick Kimmel (Ret.) grew up in a small town in central Washington. Instead of attending college on a baseball scholarship, he joined the Marines in 2008. On Dec. 1, 2011, Nick lost his legs after landing on a 40-pound improvised explosive device while helping to build a patrol base for the Georgian army just south of the Kajaki Dam in southern Afghanistan.

In the Fall of 2016, Nick asked his father Rick and friend, Rich Smith of Bellevue Fire Department, how he could give back to the Gary Sinise Foundation for the amazing things they did for his independence. As a result, the first of many Firefighters Ride 4 R.I.S.E. was created.

Together, the group works to raise funds to support the building of specially-adapted custom Smart Homes for America’s most severely wounded veterans and their loved ones.

“Seeing how happy he is — the Gary Sinise Foundation provided that for him,” Soward said.

Soward is joined this year by 18 riders. He said they rotate the driving duties, and 10 bicyclists will do the whole trip.

This year the NW Fire Velo “Firefighters Ride 4 R.I.S.E.” (FFR4R) Team will travel from Seattle to Colorado Springs. They will cover 1,600 miles and 80,000 feet of climbing as they make their way to the IAFF Fallen Firefighter Memorial.

Soward said they are in the process of planning a cross country ride. The ride will happen in 2021 on the 20th anniversary of 9-11. The trek will start in Los Angeles and finish in New York City. Firefighters from all over the country are expected to participate, he added.

A special triangle ride is also planned. Stops will be made at Shanksville and the Pentagon and will finish at Ground Zero, according to Soward.

Soward and his fellow bicyclists were treated Thursday night to a meal at Old Chicago in Rock Springs. Soward offered a huge thanks to general manager Michael Martin at Old Chicago for the meal, which was offered on the house.

As the group readied for the road Friday morning, they were given a $500 donation from the Rock Springs Firefighter Local $1499.

From Rock Springs, the group heads to Wamsutter, where they will meet with local firefighters there to assess their equipment needs. Soward said R.I.S.E. offers a First Responder grant program which helps provide firefighters with needed equipment.

“We do what we can,” he said. “That’s the payback for us, the feel good feeling we get from this.” 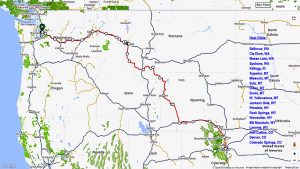 Pictured is the route firefighters will ride and the stops they will make on their way to Colorado Springs, Colorado.