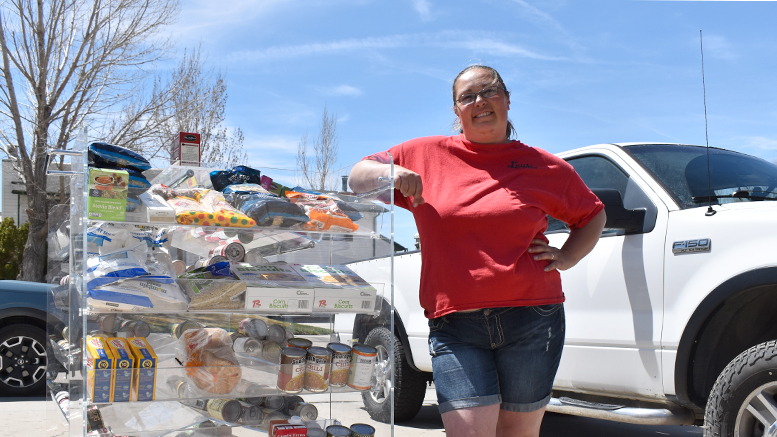 ROCK SPRINGS, WYOMING (May 1, 2021) – One Rock Springs resident is doing her part to end hunger from her own driveway.

Laurie Davis opened a food pantry in her driveway on April 9. She calls it the Handy Up Food Cart.

“It’s for people who are struggling,” she said. “We want to give them a hand up, not a hand out.”

So far, Davis and her Handy Up Food Cart has provided food to about 15 to 20 different people each day. She said students walking home from school stop by the most to pick up an afternoon snack like an apple or banana.

Located at 1049 Truman Street in Rock Springs, the Handy Up Food Cart is open seven days a week from 8 a.m. to 7 p.m., except when the Food Bank of Sweetwater County is open and if the weather is poor.

Davis said that if someone in need of food stops by once it’s closed, she asks them to simply knock on the front door and she’ll be able to help them out.

Some of the food items that are available include cans of corn, beans, fruit, soups, chili, green beans, dried milk, pasta, rice and cereal. However, she mentioned that diapers, baby food and baby formula is needed as well.

Davis is encouraging people to donate to her food cart to help the cause.

“This has been a passion of hers to do and she works very hard,” said someone close to Davis. “She is truly an angel for wanting to do this it and making it happen all on her own.”