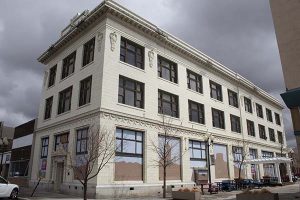 No comment was taken during a public hearing about the project, and council did not discuss it prior to the vote.

The downtown building located at 502 South Main Street, which has been vacant for decades, is on the National Register of Historic Places and has been a part of every city development plan since 1980.

Rock Springs will seek a $3 million grant to secure and stabilize the structure. The Business Council grant requires a $250,000 match from the city.

The grant will be the first phase of this project. It will allow the city to clean up interior debris, replace exterior doors and windows, stabilize the building, clean the outside of the building, add two new stairwells, and install an elevator shaft, as well as water, sewer and electrical utilities.

Architects estimate the entire project will cost $6.7 million before it is ready for new tenants.

Rock Springs Mayor Tim Kaumo spoke with Wyo4News after the council meeting to offer his vision for the future of the old First Security Bank. He is passionate about revitalizing the building, calling it the keystone to creating a vibrant and prosperous downtown.

“It has a unique architectural design that can be seen from everywhere downtown,” Kaumo said. “It (the renovation) should have been done years ago … If we’re not preserving our history, who will?”

He believes the best uses for the building, once it is renovated, is for business and office space. He envisions a restaurant or brew pub in the ground floor space, an area for parties and other social gatherings on the mezzanine, and office space upstairs.

Kaumo likes the idea of using the building for livable spaces but said it is much more expensive to provide.

Eventually, he would like to build an aluminum dome over Bank Court with doors on either side and with roof louvres that open to the outside. This would create a sheltered space with fire pits, tables and chairs in which people could meet, away from the weather.

Kaumo noted this is the city’s second run to get funding for First Security’s building repairs. He said if the city is not successful this time, the project will not be put on the back burner again, if it is up to him.

“We will try to do something with it. It has a lot of character and is structurally in good shape,” he said. “I hope the SLIB (State Loan and Investment Board) supports it.”

Lisa Ryberg, owner of Sidekicks Book & Wine Bar, shares a common wall with the bank. Her visions for the building are admittedly extravagant.

She would like to see it turned into a planetarium.

“It would bring in people from other communities … I think it would enhance our neighborhood in a different way,” she said. “It would be an experience, different from the typical businesses and restaurants being talked about.”

Ryberg also thought such a venture could make it eligible for educational grant funding.

A Bit of Rock Springs History

The First National Bank building, later called First Security Bank, was constructed in 1919. It is situated on South Front Street in Rock Springs. The architects, Walter J. Cooper of Salt Lake City and D. D. Spanni of Rock Springs, chose terra cotta to face the building and for architectural ornamentation.

According to the description given in the National Register of Historic Place, this building “represents one of the most elaborate use of terra cotta in southwestern Wyoming.”

The First National Bank Building is significant because it housed the first bank in Rock Springs to open under a state charter, the register states.

“Augustine Kendell arrived in Rock Springs on Aug. 1, 1887, with the intention of establishing a financial institution. The Sweetwater County Bank was opened in a converted butcher shop with Mr. Kendell assuming all bank responsibilities. Within a year business had progressed enough to warrant the conversion of the bank into a National bank under the name of First National Bank of Rock Springs. As the First National Bank grew it became the city’s largest banking institution.”

Mayor Kaumo also noted a member of Utah’s Eccles family once lived in the apartment on the top floor of the building; family members keep in contact about what the plans are for the building, he added.

Rock Springs Urban Renewal Agency Manager Chad Banks said the plan for the building is to have a restaurant and retail space on the first floor, with the upper floors used for office space.

Banks also thought the structure could be a nice fit for a boutique hotel, which would provide hotel space in the downtown area of Rock Springs — something which is currently lacking in the area.

Local attorney and Wyoming State Legislator Clark Stith has a different vision for the space. He said he would prefer to see it used for educational purposes, specifically as an innovation center in cooperation with Western Wyoming Community College.

“I believe it would be a good use of the space,” Stith said, adding that it would not have to be limited to college students but could encourage innovation in the arts and sciences in both adults and children alike.

“I would prefer not to see it become government-subsidized office space, ” he added. “We have enough office space locally.”

The next steps in the renovation process are in the hands of the state. Banks outlined the process, noting the preliminary grant was sent to the Wyoming Business Council last week: