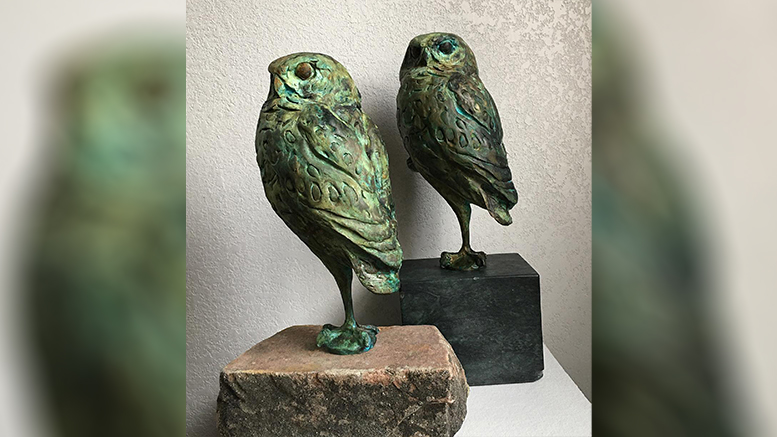 “My work is about resilience of character.  I considered attributes of being resilient as opposed to those of being fragile,” Burk said in his artist statement.  “As this body of work progressed I began to interpose human expressions and stances on the birds represented. I want the confident at-ease posture of a screech owl to convey assurance.  The relaxed expression of the short-eared owl is meant to communicate inner tranquility.  Balance is intuited in the barn owl.”

Richard Burke grew up in central Oregon and the Flathead Valley of Northwest Montana.  From early childhood he was absorbed with discovering and drawing everything in the natural world.  Because Burke had several family members who explored falconry, some of his earliest memories include kestrels and red-tailed hawks.  Burke was always captivated by birds of prey and the grace of flight.  Likewise, the beauty, tranquility and drama of the mountains and forests have always drawn him.

Considered a self-taught artist, Burke’s formal education was in Religious Studies.  He worked as a minister for almost two decades, but he continued painting, carving and sculpting in every available moment.  For years Burke carved decoys for Ducks Unlimited and captured many bird species in wood sculpture.  Eventually it became clear that his passion for art was deserving of a more prodigious effort.  It was his desire to focus on sculpting wildlife and painting landscapes fulltime which pulled Burke away from all other pursuits.  Currently, he is fully dedicated to the process of creating work in his studio in Pinedale, Wyoming.

Richard long appreciated the work of Auguste Rodin and Edgar Degas.  Contemporary artists such as Steve Kestrel and Greg Woodard have also served as sources of inspiration.  As a sculptor, Richard’s work is almost exclusively concerned with avian form.  Working in a variety of materials such as stone, wood and bronze he depicts birds balanced, at rest and watchful.  The posture and gesture of the subject is usually the concept.  Often the perched bird is caught glaring over a shoulder with a look of distain, as if interrupted.  His most current work strives to expose the characteristics of the materials utilized in the process.  Many of these later subjects are owls which lend themselves to human-like expressions and poses.  Whereas a great deal of Richard’s earliest work was subtractive sculpture, bronze sculpture has been the focus of 2020.  The ability to add and subtract is freeing for the creative process, but working in clay is also easier on the body.  Therefore, it is an attractive option in preparing for a lifelong career as an artist.

The CFAC also displays the majority of the art collection which was started by the Rock Springs High School students in the fall of 1939. It hung in the school until the CFAC was opened in 1966 for the public to enjoy the hundreds of pieces of art collected over the years.

“We are fortunate to have regional artists such as Richard display here. These are exquisite works that I can imagine hearing one screech or whistle at any moment,” said Debora Soule, CFAC director. “Sweetwater County School District #1 along with the city of Rock Springs and Sweetwater County Library System have a wonderful, longstanding collaboration.  By working together the community has an impressive treasure of art for its citizens and visitors alike.”

The public is invited to see Burke’s exhibit from Nov. 17 until Dec. 30, and take time to view the permanent collection on display. Located at 400 C Street in Rock Springs, the CFAC is a department of the Sweetwater County Library System. Hours at the center are Monday through Thursday 10 a.m. to 6 p.m., Friday, 10 a.m. to 5 p.m. and Saturday noon to 4 p.m.