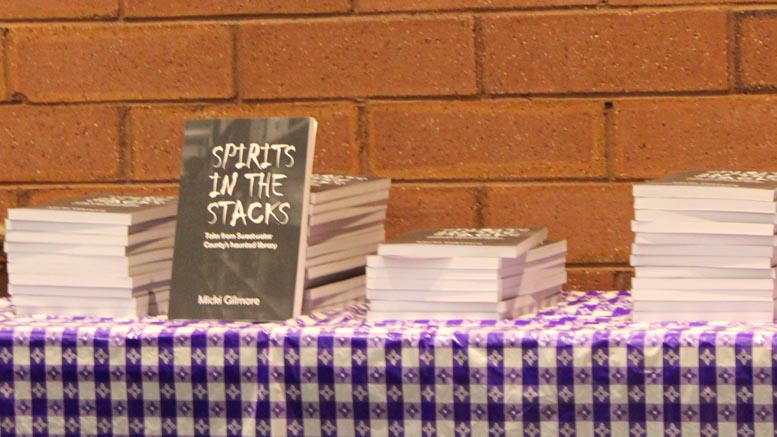 GREEN RIVER, WYOMING (Nov. 23, 2019) —  The Ghost Walk Crew, a volunteer group with knowledge of the Sweetwater County Library’s history and reported paranormal experiences, held a small get together today to share results of past ghost walks.

There was also a short book signing by Micki Gilmore, author of “Spirits in the Stacks”, a book featuring many tales of paranormal experiences that have taken place within the walls of the library. Gilmore is also a member of the Ghost Walk Crew.

Making up the Ghost Walk Crew is Micki Gilmore, Ellie Davis, Bianca Jorgensen, Tiffany Kennah, and Russell and Mary Conley. Members of the crew have also entered pieces into “Spirits in the Stacks”.

Many residents of Green River have claimed the Sweetwater County Library is haunted. All of the members of the crew agreed to that statement and provided a number of stories to back up the claim.

The library is built on the ruins of an old Green River cemetery, that was in use from the late 1800s to the early 1900s. When the cemetery began to run out of space, it was moved to its current location further up the hill from the library. Caskets, bones, and headstones were all dug up and moved to the new location, yet some are believed to be left behind.

It is the remaining buried that supposedly haunts the library.

Micki Gilmore had a number of stories to tell. She claims to have witnessed three different aspirations in the library and has had several other encounters with the paranormal. Using ghost-hunting technology, she has had interactions and even conversations with ghosts. Other stories claim that pianos would be playing on their own, typewriters functioning without a user, and even electronic curtains being opened and closed on their own.

Ellie Davis claimed to be in the midst of ghosts during a ghost walk in the ladies’ bathroom when she heard a voice whisper her name. She has also claimed to hear the ghostly howl of a dog throughout the library.

Bianca Jorgensen has gone to the library ever since she was a young girl. She claims, “I knew from a young age that something was different here. I’ve seen a lot of things, and heard even more.” One story of hers involved papers rustling and chairs moving in an empty office space. She also claims to have caught a number of disembodied voices on an EVP (electronic voice phenomenon) device.

Tiffany Kennah described an eerie moment in the handicapped stall of the women’s bathroom when she was able to perfectly make out a woman’s face in the tile upholstery, only to never be able to see it again after. Kennah believes that the ghosts in the library “interact mostly with children”, as her story took place as a young child. She also believes her children have had paranormal experiences in the library when one of her children was told not to check out a book by an unknown, invisible voice.

Mary and Russell Conley are the newest members of the Ghost Walk Crew and have added their experience from their hometown in South Carolina as well as ghost-hunting technology experience to the group. Russell claims to have filmed a number of apparitions with his SLS camera, which uses infrared lighting to paint a sort of “stick-figure” of any apparations that may be in the room. Mary claims to have been physically touched by a number of ghosts, though she said it was never done with foul intention.

The Ghost Walk Crew hopes to continue its mission to educate others about the library in 2020.