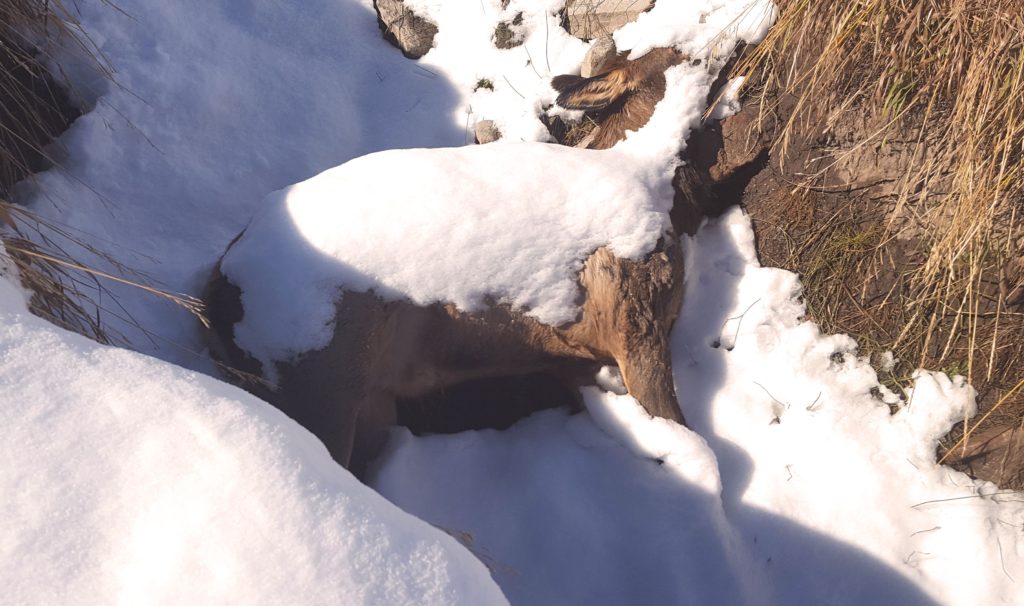 GREEN RIVERâ€” On May 23, 2017 Billy A. Busbice Jr. of Olla, Louisiana appeared before Lincoln County Circuit Court Judge Frank Zebre and pled guilty to charges of intentionally allowing an antlerless elk to go to waste and an additional charge of taking an elk without the proper license. Busbice stars on Wildgame Nation, a reality hunting show on the Outdoor Channel, and also owns an outdoor products company.

The case started on October 16, 2016 when Kemmerer Game Warden Chris Baird received a report from a group of hunters that had observed a possible wildlife violation on the Spring Creek Ranch, which is owned by Busbice, on La Barge Creek. â€œThe hunters told me that on the morning of October 15th they observed a man hunting on the ranch,â€ Baird said. â€œApparently, there was a younger man with the hunter who had a video camera and appeared to be filming the hunt. They watched the hunter shoot one elk, presumably a cow, and then shoot a bull. The first elk fell within around 60 yards of where the bull went down. They observed the hunter and the cameraman walk up to look at the bull and then leave the area.â€

Warden Baird also was told that another man came and field dressed the bull and hauled it away with a backhoe. â€œThe hunters told me the first elk, which was later determined to be a cow, still lay in the meadow after the man had taken the bull away with the backhoe,â€ Baird said.

Baird knew Busbice had a Commissionerâ€™s elk license and that there had been a very large bull elk frequenting the ranch. On October 17th, Baird met with Busbice before he flew to Louisiana. Bairdâ€™s summary of this encounter is that after a short interview, Busbice admitted to having accidentally killed a calf elk while trying to harvest the large bull. Busbice stated that after the sun had gone down he had instructed the ranch manager and the cameraman to drag the calf elk into an irrigation ditch to conceal it. No attempt to field dress or preserve meat from the calf was made. Interviews of the cameraman and the ranch manager revealed similar stories and the men admitted to having concealed the calf in the ditch and disposing of the bullâ€™s gut pile in the creek, in an attempt to hide any evidence of the poaching. Busbice admitted that he did not call Warden Baird because he was concerned about having recently been cited for previous wildlife violations. At this time Warden Baird seized both elk from Busbice and an unedited video of his hunt.

â€œOn his fourth shot, Busbice hits the bull in the left shoulder,â€ Baird said. It then falls to the ground. At the end of the video you can hear Busbice say, â€œWe have to eliminate that part when I shot a cow.â€ He also is recorded saying, â€œYeah, but we got to get rid of that cow.â€

Judge Zebre sentenced Mr. Busbice to 180 days of jail suspended, providing that he lead a law abiding life during one and a half years of unsupervised probation; he was sentenced to pay the maximum fines for both violations and the maximum in restitution for the illegal take of both elk for a total of $23,000.00; and had all of his game and fish license privileges revoked for two years to include all of 2017 and 2018. Because Wyoming is part of the Interstate Wildlife Violator Compact, this loss of his license privileges applies in 45 states, including his home state of Louisiana.

â€œThere are many take-home messages from this event,â€ Baird said. â€œWe are extremely grateful to the sportsmen that reported these violations. The successful prosecution of this case likely would not have happened without them.â€

The bull elk he was convicted of shooting illegally was a highly visible large bull elk. The bull roughly scored over 350 inches.Â Mr. Busbice was also cited earlier in 2016 of false oath for purchasing a resident general elk license as a nonresident and purchasing more than the authorized number of deer licenses and paid $1430.00 in fines for those violations.

Anyone with information on a wildlife violation may call the Stop Poaching Hotline at 1-877-WGFD-TIP (1-877-943-3847). Tips may be reported online at wgfd.wyo.gov, or by calling the Green River Game and Fish Office at-1-307-875-3223. Poaching information may also be texted; text keyword WGFD a message toTIP411 (847-411).Callers can remain anonymous and may be eligible for a cash reward if the information leads to a conviction.