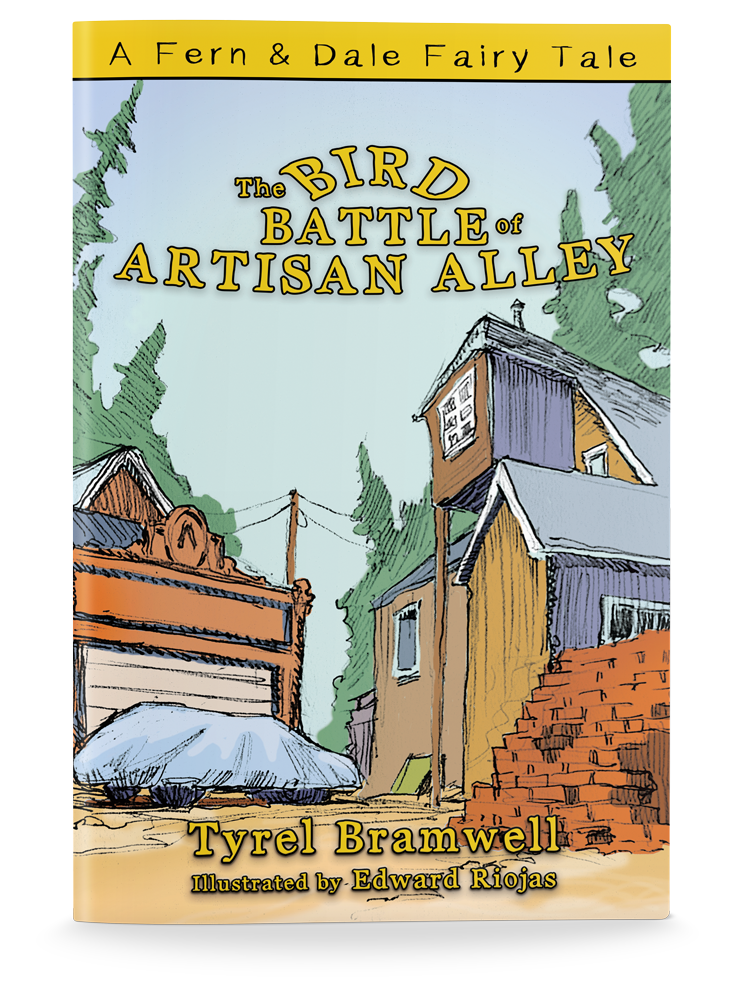 The children’s chapter book, which was inspired by Ferndale’s storybook charm, has been well received by readers of all ages across the world.

Together with illustrator Edward Riojas, the team is excited to bring readers back into a magical world that is all about the wonder of small-town life.

This time the fun happens in “The Bird Battle of Artisan Alley: A Fern & Dale Fairy Tale.”

Bramwell is thrilled to create something fun for families.

He said, “My hope for the first book was that it would be successful enough to warrant a second and even a series. Well, we’re on our way!”

He went on to say, “You don’t have to live in the Ferndale area to enjoy the stories. Readers who’ve never been here love the first book. Seriously. From Papua New Guinea to England, readers love Fern & Dale and all their Wazzlewood friends.” The book comes out on Dec. 3 with Bramwell signing copies at Ferndale’s local bookstore, Chapman’s Bookery & More, on Dec. 6 from 5-9 PM.

Because the books are developing a far-reaching audience the team behind the launch has created a coloring contest with an online entry. Winners will be selected from five different age groups. Entry instructions can be found at tyrelbramwell.com. Paperback and ebook editions are available for pre-order on Amazon.com.  The Bird Battle of Artisan Alley picks up where The World of the Wazzlewoods left off. When Fern and her younger brother Dale hear a distressing sound coming from the alley behind Main Street, it’s a race to safety and the beginning of another magical wazzlewood adventure. More friends. More enemies. More Cream City magic!

“This book nearly wrote itself,” Bramwell said. “The cat that belongs to the owners of Mind’s Eye Coffee Lounge went missing earlier this year. It was a total bummer. This story emerged out of the idea that maybe I could give a sad event a hopeful ending.”

He said, “One of my goals with the A Fern & Dale Fairy Tales series is to inspire young readers to see the wonder that’s right in front of them. People tend to think that if anything great is going to happen to them, it’ll be because they pursued big dreams or set out to live exciting lives, but awesome adventures happen everywhere and with the amazing people already in our lives. We just have to pay attention, listen, and open our eyes.” Bramwell hopes Fern and Dale’s second fairy tale will be an exciting read for kids and a story that even adults will appreciate.

Spicing things up with the WWCC Chili Cook-off