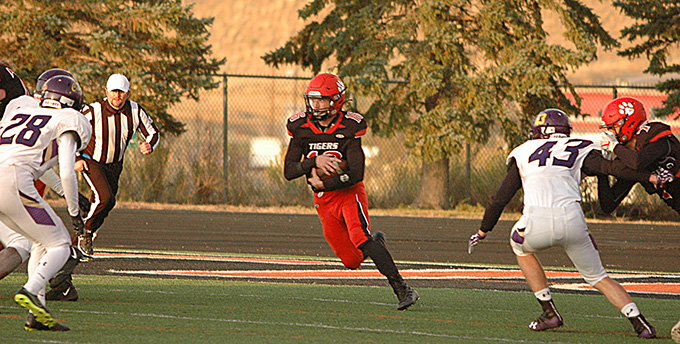 The Sheridan Broncs, who are last year’s Class 4A state champions, are coming into town following a 20-17 loss last week to Cheyenne Central High School.

“After them having a tough loss where they did make some uncharacteristic mistakes against Central, they’re definitely going to come back and play our very, very best,” said Rock Springs head coach Mark Lenhardt. “They’re going to have things corrected and they’re going to be playing good football right away. I have the upmost respect for them.”

Lenhardt said he has the upmost respect for the Sheridan program.

“One thing I can tell you about Sheridan, in all classes, they’re one of the elite programs in the state that’s not a mystery. I’m really, really impressed with their play up front,” said Lenhardt.

“I think they do a terrific job of being able to move and it’s just essential that our guys find their aiming point when we’re on defense and not get reached because they do an exceptional job of moving as anyone and they play until the whistle. We actually show film of them to our freshmen on exactly how hard you should play.

“That’s actually what I admire most about Sheridan. Everyone talks about what they do schematically, but ultimately, I think they lead the state in effort every year. I think they do that better than everyone else.”

Last season, the Tigers played the Broncs in the first game of the season, losing 23-7. However, the Tigers had opportunities to put points on the board when they were in red zone.

“In that game, we got inside the 10 twice. We turned the ball over once and we missed a field goal. We did some really, really good things. I don’t know if there’s a lot parallels to draw between last year’s first game and this year’s fourth game,” Lenhardt said.

Sheridan comes into the game with a record of 2-1, while Rock Springs sits at a 1-2 record after losing two straight. Lenhardt said the biggest thing for the Tigers coaching staff to do is keep the team playing with confidence.

“I think more than anything right now is we got to try to keep their confidence. I mean, there’s no reason to beat around the bush. I’ve coached 13 games here and we’ve lost eight of them. Six of them, we had the lead going into the fourth quarter. In three of them, we lost the lead in the last 30 seconds. Those are heartbreakers,” Lenhardt said.

“Those are tough on everybody. We’ve been really hard on them in terms of their effort, what we expect and not changing how we coach. But at the same time, we want to hug them up and let them know they’re not far away. If a few things go our way and we start making a few breaks for ourselves, we can be right there.

“I think our guys are doing a good job. They’re working hard and learning football. We’re only in year two of this. We didn’t get an offseason. We’re building. I think good things are to come in the future for the Tigers. It’s not just going to happen overnight.”

Lenhardt said he’s excited to play Sheridan early in the season because it’s a good measuring tool to see where the Tigers are at and what they need to focus in order to make a strong playoff push.

“I like playing a good team early in the year because it really exposes our flaws and weaknesses,” he said. “Hopefully, we can work on them and continue to build. Wyoming is only a 10-team league and eight teams make the playoffs. In the tournament, anything can happen. There’s a lot of parity this year in 4A.”