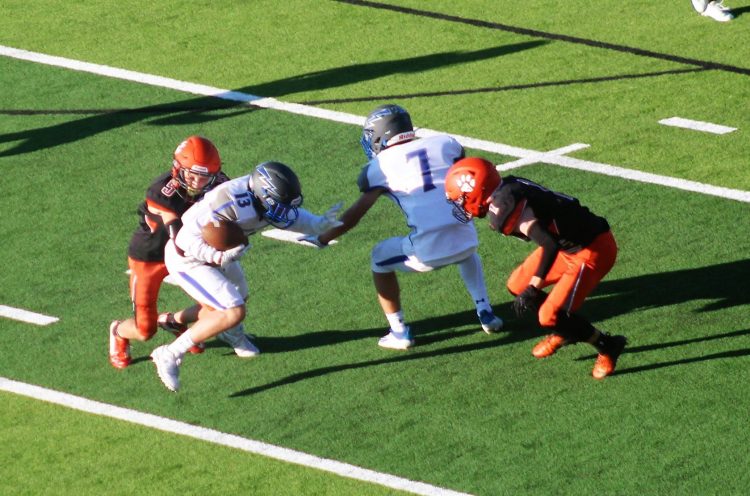 Head coach Mark Lenhardt likes what he has seen from his offense so far, adding that it has been above his expectations.

“I love this group. They work hard. They’re resilient. They worked very hard in the offseason. Even through two games, we’ve played beyond my expectations offensively. I feel good about that. Defensively, we’re still working and putting guys in place but the effort has never waned. We’re going to continue to improve and hopefully we’re playing our best football by the end of the year,” he said.

Last season, the Tigers defeated Kelly Walsh, 22-3, but Lenhardt knows that they have a tough challenge ahead of them on the road Friday at 6 p.m.

The Tigers split their first two games, defeating Cambell County, 35-6, and falling to Thunder Basin, 41-21. Both squads played a four-man front on defense. Kelly Walsh will bring a three-man front, which is something the Tigers have been adjusting to during practice this week.

“We’ve had to adjust some of our rules and things we do this week to combat that. We got some new kids playing this week. We’re rebuilding against the new front and a new style offense, it kind of feels like the first game all over again. Hopefully we can limit mistakes and get it done,” Lenhardt said.

“It’ll be a challenge. I think they’re throwing the football better than they did a year ago. They have some good speed on perimeter. They’ll definitely test our secondary and our guys on the edge, so hopefully we can find a way,” Lenhardt said.

Ultimately, the Tigers will have to create turnovers and take care of the football. Lenhardt said that was the biggest difference in their first two games of the season.

“I think we got to create turnovers. Last week we didn’t create any turnovers. We had one of our own and got a punt blocked which is essentially a turnover, so those are things we can’t do. When we won in Week One, we created turnovers and didn’t have any. Ultimately, that’s going to come down to it,” Lenhardt said.

“On a grass surface, there’s going to be a little bit more mud and a little wet because of the snow and weather we got this week. We definitely got our hands full to make sure we’re taking care of the football.”