The Tigers dominated the first half of the first home game Friday evening in Tiger Stadium, with a touchdown midway into the first quarter. Quarterback Seth Hymas showed focus and offered leadership to his team, starting with that first pass for a touchdown with 4:20 left in the quarter.

After a successful field goal, the Tigers held on to end the quarter up 7-0.

Just 6 minutes into the second quarter, Hymas connected again for a touchdown. The field goal was good, bringing the score to 14-0.

Tiger Chase Petty followed that up quickly by running the ball in for another touchdown with 6:07 left on the clock. The score was 21-0 after another successful field goal. 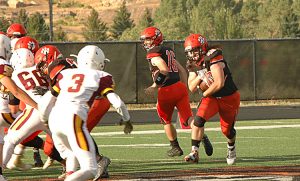 Barely two minutes later, Tiger Favor Okere intercepted a Plainsmen pass. This set the Tigers up for another touchdown by Reese with a scant 46 seconds left in the half. The field goal did not find its mark, and the players headed into halftime with Tigers up 27-0.

The Plainsmen came out of halftime with renewed vigor. Pushing down the field, Laramie ended up scoring its only touchdown of the game with 1:42 left in the third quarter, bringing the score to 27-7 after the field goal attempt passed the uprights.

Rock Springs found its stride again in the fourth quarter, scoring two more times, at 9:45 and again at 7:06. The two teams struggled up and down the field after this, with neither team scoring again.

This win brings the Tigers 1-1 on the season. They next face Cheyenne Central at home next Friday.