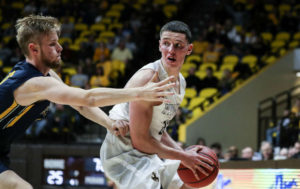 It took two overtime periods for the Wyoming Cowboys to gain their sixth win of the season as the Pokes defeated Drake 96-89 Saturday at the Double A in Laramie.

Alan Henrdon led Wyoming (6-2) with a career high 32 points and 10 rebounds.Â  Justin James added 24 points with Hayden Dalton chipping in with 17 points and 14 rebounds.Â  Drake (4-3) was led by Reed Timmer with 28 points.

The game was tied at 75-75 at the end of regulation,Â  82-82 after the first overtime period before Wyoming pulled out the win by out scoring Drake 14-7 in the third second overtime period.

The Pokes will hit the road for their Wednesday game at South Carolina (6-2).Â  Last year the Gamecocks played in the NCAA Final Four.