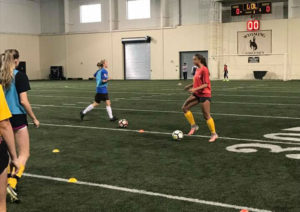 LARAMIE, WY – The University of Wyoming soccer program announced today the signing of nine student-athletes to National Letters of Intent for the 2018 season, two of which hale from the Cowboy state.Â  Beside Wyoming, other signees consist of incoming freshmen from Colorado, Nevada and California.

â€œWeâ€™re excited to announce our class of 2018 and look forward to seeing how they can contribute to our winning tradition here at Wyoming,â€ UW head coach Pete Cuadrado said. â€œThis group consists of some of the top talent in the region and adds considerable depth to our team at every position. Each student-athlete already has a history of success at the high school or club level, both on the field and in the classroom.â€

Here are the bios of the two Wyoming soccer signees:

Kennedy Schomer, Midfielder/Forward, Gillette, Wyoming, Campbell County High School:Â
Schomer is a four-year letterwinner from Campbell County High School. She is a two-time all-conference selection and was named to the all-state team last season. Schomer led the Camels to a 4A state championship in 2017 after a second-place finish in 2016. Schomer was named the Offensive MVP by her team in her freshman and sophomore seasons. She also played 10 years of club soccer for the Gillette Edge.Â Â Kennedy is the daughter of Jeff and Christy Schomer.

Sekoya Romero, Forward, Laramie, Wyoming, Laramie High School:
Romero is a three-sport letterwinner at Laramie High School. She lettered in soccer her sophomore season under head coach Kimberly Whisenant. She also lettered twice in basketball and once in volleyball. In her sophomore season, she led Laramie to conference and state championships, as well as a second-place finish at regionals, while making the all-conference and all-state teams. Romero also was named Offensive MVP her sophomore season and served as team captain in her junior campaign. Romero also played three years of club soccer for the Colorado Storm FC.Â Sekoya is the daughter of Samson and Kerri Romero.

Lake Hattie reopens to watercraft use