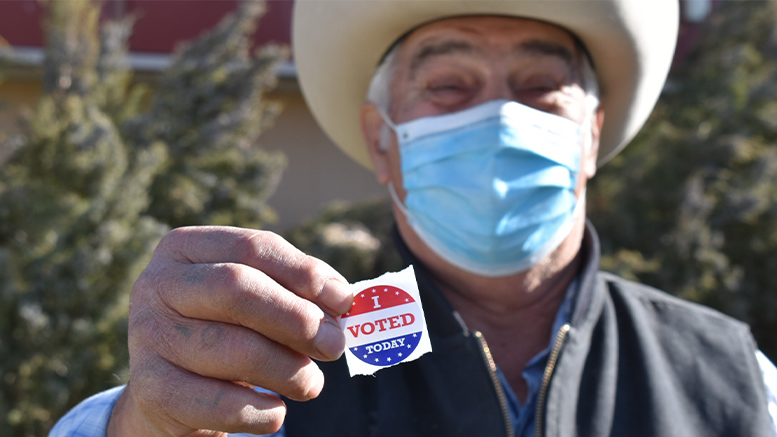 LARAMIE, WYOMING (November 20, 2020) — A recent survey of Wyoming residents showed that the coronavirus pandemic influenced how voters chose to cast their ballots in the Nov. 3 general election.

Nearly equal percentages of Wyomingites reported voting at the polls on Election Day and voting early either at early-voting locations or by mail.

Telephone interviews with 614 Wyoming residents selected at random were conducted by the Wyoming Survey and Analysis Center’s Survey Research Center at the University of Wyoming. Participants in the survey were interviewed in mid-October and again during the week following the election. The survey has a margin of error of plus or minus 4 percentage points.

Jim King, a UW professor of political science and the survey’s director, said the survey revealed an increase in early voting compared with the 2018 general election.

“This year, 48% of Wyomingites voted early, compared with 31% two years ago,” King said. Among those casting ballots early, 48% cast their ballots in person at designated voting sites, and 52% did so by mail.

One factor associated with the choice of voting early or in person on Election Day was concern over the coronavirus, according to King. Fifty-six percent of those worried that they or a family member might contract the virus voted early, while only 36% of those not worried chose to vote early.

“It’s reasonable to conclude that concern about the coronavirus led to the increase in early voting this year,” King said. “This is the one thing that has changed the political climate the most since the last general election.”

Two other factors were associated with the decision to vote early. In a pattern seen across the nation this year, early voting was more common among Democrats and independents than among Republicans. And, as was seen in previous elections, age is associated with early voting, as older citizens commonly take advantage of the convenience offered by voting at early-voting locations or by mail. This year, 64 percent of Wyomingites age 55 years and older opted to vote early, while the identical percentage of those age 54 years and younger chose to vote in person Nov. 3.

Biennial surveys of Wyoming residents are conducted by UW’s School of Politics, Public Affairs and International Studies in partnership with the Wyoming Survey and Analysis Center. The questions focus on attitudes toward government, elected officials, candidates for office and contemporary policy issues