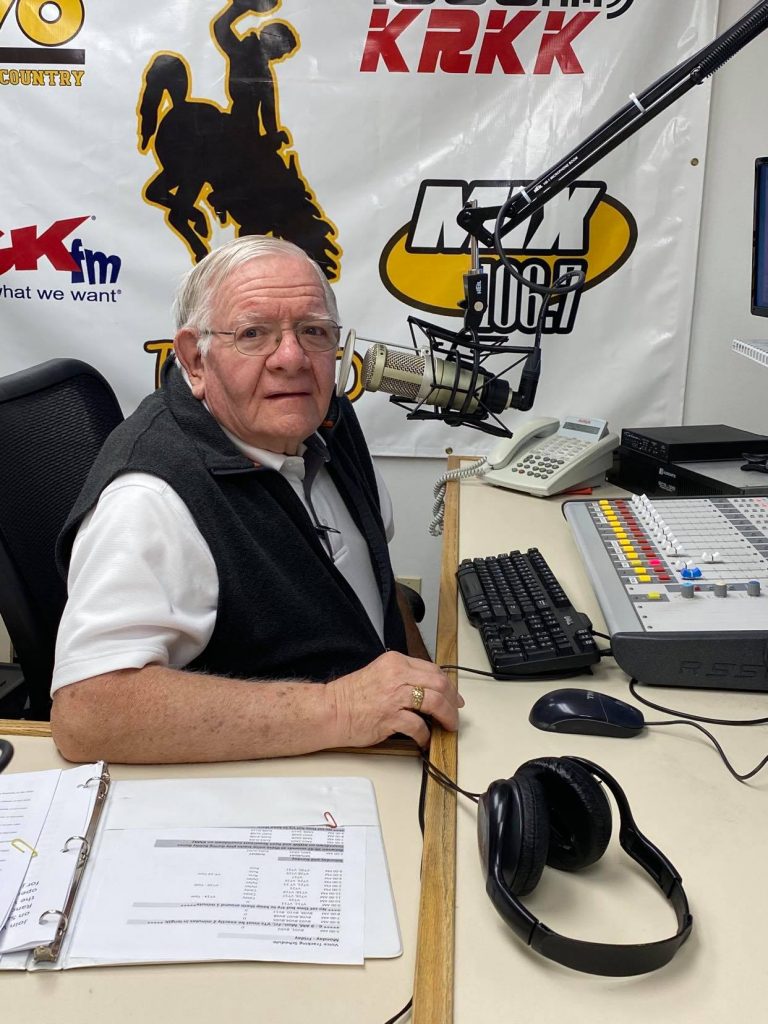 ROCK SPRINGS, WYOMING (September 25, 2020) — It’s fair to say that if you’ve lived in Rock Springs, Wyoming, or Sweetwater County for any length of time, you’ve probably heard the name, Tom Ellis. If not, allow us to introduce you to this Wyoming Association of Broadcasters award-winning (twice!), radio host. Tom Ellis is WyoRadio’s and Wyo4News’ most senior employee. Tom started his career with Big Thicket Broadcasting in 1985 and he has seen it all. In this interview, Tom shares his experiences and the evolution of radio.

Tom, when did you start with WyoRadio?

“I started on the 22nd of May 1985. I have that date in my mind because I was living in Green River at the time, and I was driving back and forth every day. The day I started, construction started on the interstate and they had it reduced to one lane travel each direction.” Tom stated. “I always kind of liked the 20 minutes to work and 20 minutes from work. It was always kind of a buffer for me, relaxing. But, the day I started, it was May 22, 1985. That was a Monday and that was the day they decided to start tearing up the interstate and making it almost impossible to drive on it.”

“When I started with Big Thicket Broadcasting we had two radio stations. We had KQSW, which at that time, was a Rock and Roll station, and then we had KRKK. The format on KRKK was country but at that time on KQSW, we had live Jocks (on-air talent) on the air 24/7. Back then, it wasn’t automated like it is today. We had live people at the microphones 24 hours a day, 7 days a week. It was a whole different thing.”

“When I started I was in sales. I started out as a Sales Representative. I enjoyed doing that and as time went along and opportunities came along, I got into the position of Sales Manager. At that time we were all doing a lot of our own production, so I learned the production side of everything, and then a couple of years later, they changed the format on KQSW to country and they started to automate the station. We still had a live morning show and then we automated the rest of the day and it had an automation system that ran the whole thing. That must’ve been in 1987 or 1988.”

“I spent time as a salesperson, sales manager, and about eight or nine years ago I thought I was ready to retire, and then I did. Six weeks later they came back to me and asked me if I wanted to be the general manager – So I spent about five years as a general manager. I then sort of went into semi-retirement again and now I’m just here doing odd stuff. Producing a Sunday morning radio program, doing some production, and a bunch of other stuff that needs to be done on a regular basis but I’ve cut my hours back to where they’re manageable. To the point where it leaves room for some golf and time with the grandkids.

I do a lot of the affidavits for the stuff that we have to provide for the various companies and I do the Sunday Morning Program – Insights. We had a guy in the mornings who was doing that program and then when he left I guess I just started doing it because someone needed to do it.”

“I’ve won two awards since I’ve been here, both from the Program Insights. My awards, they’re from the Wyoming Association of Broadcasters. (For best News Talk Program) I think it was two or three years ago, I won best news program and then I won it again this year.”

Recalling memories,
Tom laughs as he talks about his first Live Remote assignment.

“Before we did the automated things, we really did a live remote – different than we do it now. It was really live. We had a unit that would broadcast back to the radio station, and the announcer would go out and actually be on-site and broadcast live from wherever it was.”

“The first time I ever had to do a live broadcast was over in Green River. It was at a boat sale in the lower parking lot on Uinta Drive. The sales rep that had sold it was cueing me from inside a trailer to let me know when I needed to start talking because I was outside. It was rainy and it was nasty, and I had never done that before it was a first for me, and I was coming down with a little case of the flu so I didn’t feel very good –  I mean it was a total mess. Talk about a train wreck, that was it. I really don’t know why they ever let me do another one to tell you the truth.”

“You know they say, if you like what you d–if you love what you do–you’ll never work a day in your life and I really like the production part of it. I like working with people, I really like what I’m doing and I’m willing to do it as long as they let me do it. Even as I’m sitting here right now, I’m thinking about these programs that I have to do and how I’m going to do them.”

We get the hint, Tom. We’ll let you get back to work.