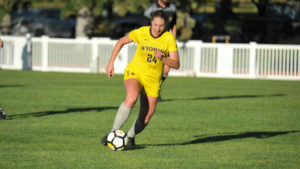 The Cowgirls (7-4-2, 3-1-1 MW) put up four unanswered goals to put the game out of reach before an hour into the contest. Junior defender Taylor Burton got things going with her third goal of the season in the 14th minute, heading in a corner kick from senior defender Tristan Tyrrell. Sophomore forward Michaela Stark doubled the lead in the 17th minute on a pass from redshirt sophomore midfielder Summer Taube. It was the first goal of the season for Stark and the first assist for Taube.

Just over five minutes after Starkâ€™s goal, her sister, junior forward Brittney Stark, moved the margin to 3-0 on an unassisted goal. The score would remain at 3-0 for the remainder of the half.

It took only five minutes into the second half for senior forward Alisha Bass to get in on the action with her fourth goal of the season, giving UW its largest lead this season. Nevada (1-12-0, 0-5-0 MW) got a goal back three minutes later and a second with less than 10 minutes left in the game, but could not complete the comeback.

Wyoming will complete the weekend slate of action on Sunday at 3:00 p.m. against UNLV.