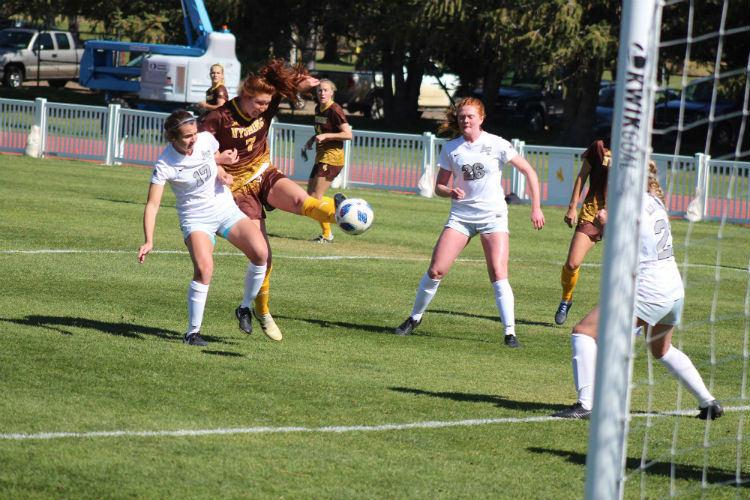 Both teams came out firing early to begin the game. The Cowgirls had three chances within the first eight minutes, but two shots went wide and a chance from senior Morgan McDougal was saved by goalie Jennifer Hiddink. In the 16th and 21st minutes, the Falcons had opportunities from Taylor Cobb and Kaitlyn Cook which were stopped by goalie Cristina Salazar. Each team would have two shots a piece the remainder of the half as it would 0-0 headed in to the break. Wyoming had seven shots compared to five by Air Force and five corner kicks.

There wasn’t a lot going on for either team during much of the second half. Both teams took two shots a piece and it looked like it would be headed to extra time. With 85:57 on the clock, Air Force pushed down towards the goal. Goalie Hannah Lee came out to grab the ball, but it was taken away by Cook and she dribbled it in to give the Falcons a 1-0 lead. A little over one minute later, Adalyn Vergara would score the equalizer. She would bury a header off a Jessie Gentle corner kick to make it 1-1 and it would go in to overtime.

It was a quiet first ten minutes in the first overtime. Summer Taube had a look for the Cowgirls and Cook for the Falcons, but neither was successful. In the second overtime, Wyoming came out firing and had five chances. Unfortunately, none of them were able to reach the back of the net as it would end in a 1-1 tie.

Wyoming is back in action next week with two road contests. They will face the Fresno State Bulldogs on Friday followed by a match-up against the San Jose State Spartans on Sunday.