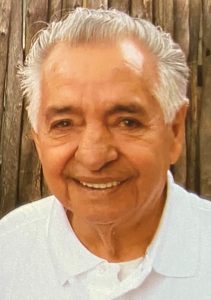 GREEN RIVER, WYOMING (September 14, 2020) — Jacob C. Sanchez, 88, passed away Friday, September 11, 2020, at Mission at Castle Rock in Green River, Wyoming. He was a long-time resident of Green River and a former resident of Taos, New Mexico.

He attended schools in New Mexico and California.

Mr. Sanchez married Leonarda Reyes in 1981 in Las Vegas, Nevada, and she preceded him in death.

Jacob worked construction for many years.

He was a member of Immaculate Conception Catholic Church.

Mr. Sanchez enjoyed being with family, especially his grandchildren, and fishing.

He was preceded in death by his parents, wife, one brother, Tim Sanchez, and one step-son, Alejandro Alvarado.

The family respectfully requests donations in Jacob’s memory be made to Mission at Castle Rock, 1445 Uinta Drive, Green River, Wyoming 82935.

Condolences may be left at www.vasefuneralhomes.com.