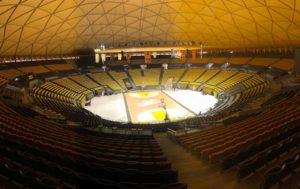 Laramie, WY. â€“ Wyoming will wrap up the non-conference portion of the schedule tonight 7:00 p.m. in the Arena-Auditorium hosting Front Range foe Northern Colorado. It is the first meeting since the 2014-15 season in a series that dates back to 1909.

The Cowboys head into the contest winners of 13-straight games in the Arena-Auditorium. The Pokes have also won 20-straight non-conference home games in the â€œDome of Doom.â€

The Pokes earned their second-straight come from behind win on Saturday against Texas Southern. Wyoming has been solid rebounding as of late grabbing 47 boards against the Tigers, which included a season-high 15 offensive rebounds. That mark is the second most under head coach Allen Edwards, as UW grabbed 17 against USC last season.

The Bears head into tonight’s contest with an impressive 8-3 record. Northern Colorado defeated Denver 83-63 at home on Dec. 13 in their last contest. The Bears are averaging 76.2 points per game and are allowing only 65.4 points per contest. Sophomore guard Cody Kelley leads the team dishing out nearly three assists per game.

The Cowboys Open conference play on Dec. 27 against San Diego State in the Arena-Auditorium.