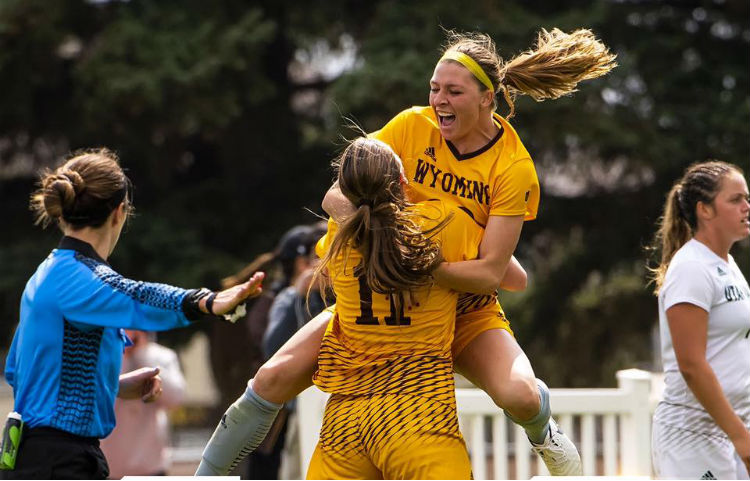 Utah State got an early opportunity in the game with a shot by Kami Warner that sailed wide of the goal. With 7:09 on the clock, the Cowgirls had its best look with a chance from senior Taylor Burton which was saved by goalie Grace McGuire. Each team took a combined six shots the remainder of the way with both defenses playing strong. The two would play to a 0-0 tie headed in to halftime. Both teams each four shots and a corner kick while Wyoming had six fouls compared to four.

The Cowgirls seem to push the pace more out of the halftime break. They would get four shots off compared to one by Utah State in the first ten minutes including two on goal. The Aggies had a couple of nice looks by Warner which was saved by goalie Hannah Lee and a shot by Hallee Jones that went wide left. Wyoming’s best opportunity came in the 77th minute, back to back shots by senior Brittney Stark and freshman Caitlin Pickett were saved by McGuire to foil a scoring chance. UW outshot Utah State 9-7 in the period but it would remain 0-0 after 90 minutes.

In the first overtime, Wyoming had a chance off a free kick by Alyssa Murray to freshman Adalyn Vergara. Unfortunately, her header went straight into the arms of McGuire. The next ten minutes seemed like it would head down the same as the first. With the time winding down, Brittney Stark pushed the ball down inside the Utah State box. A slide by senior McDougal would force the goalie to come out which rebounded back to Pickett. She would have a wide open net to score the game winner with 109:44 on the clock. It was her second goal of the season.

The Cowgirls will close out the weekend against the league-leading Boise State Broncos on Sunday. The match is set for 1 p.m. in Boise.