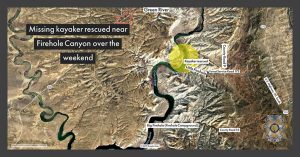 On Saturday, Sept. 7, 2019, at approximately 8:30 p.m., Sweetwater County Sheriff’s Office deputies responded to the Green River and the upper part of Flaming Gorge Reservoir in an attempt to locate an overdue kayaker.

A traveling companion of the 57-year-old Henderson, Nevada, man reported to emergency dispatchers that his friend — an experienced kayaker — launched from Expedition Island in Green River by himself at around 8 a.m. on Saturday morning. The two planned to meet at Firehole Campground at 2:30 p.m. on Saturday afternoon. After waiting at the rendezvous point until around 6:30 p.m., the reporting party grew concerned for his friend’s safety, returned to town and phoned police.

Sheriff’s deputies along with officers from Green River Police Department and emergency crews from Green River Fire Department and the Bureau of Land Management spread out along the river and scoured the areas of Expedition Island, Scott’s Bottom, Stratton Meyer, Firehole Campground and Buckboard Marina. A utility terrain vehicle and rescue boat were deployed to aid in the search.

An AirMed helicopter was also launched in an effort to canvass the river from above, but it was unable to fly low enough to the ground through the river canyon given the low-light conditions.

After working through the night and into the early morning hours of Sunday, Sept. 8, rescue crews temporarily suspended the search at around 2 a.m. and resumed operations at dawn on Sunday.

After again launching a helicopter to assist with the search and while the helicopter was en route to the river Sunday morning, Deputy Scott Morris spotted the missing man in a green inflatable kayak still on the water in the area of Little Firehole at about 7:55 a.m. and quickly helped him to shore.

While cold, tired and disoriented, the rescued man was otherwise uninjured. He told Deputy Morris that he became exhausted after fighting poor weather conditions and high winds through the canyon the previous day, that he docked his kayak and spent the night on shore, and was attempting to paddle back upstream to return to his vehicle.

In a social media post yesterday afternoon, the rescued man wrote, “Well…after an epic cold night, I ended up about 7 miles short of Firehole Canyon. Thanks to [my friend] for waiting so long for me to show up last night and for calling [emergency responders]. Thanks also to Scott Morris of Sweetwater County Sheriff’s Office for plucking a slightly hypothermic kayaker off the river/reservoir and delivering me to my vehicle in Green River.”

Sweetwater County Sheriff’s Office thanks and credits all involved for a positive outcome in this incident. It is the practice of the Sheriff’s Office not to identify those involved in a search and rescue mission, when possible, out of respect for their personal privacy and that of their friends and family.