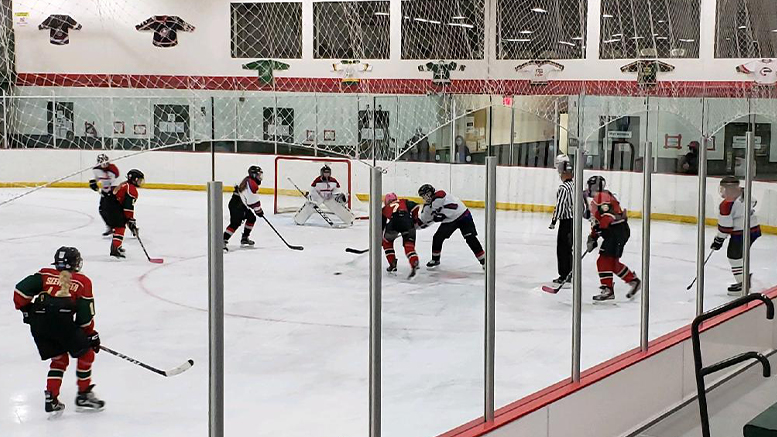 PINEDALE, WYOMING (January 12, 2021) – The Rock Springs Lady Miners 19U girls hockey team earned their first victory of the season Friday night against the Pinedale Lady Glaciers. The two teams played a four-game series over the weekend. Rock Springs went 1-1-2 on the weekend.

Pinedale’s Ellie Jensen scored the only goal in the first period, giving the Lady Glaciers a 1-0 lead at the first break. In the second period, Anabella Fausett scored twice, giving Rock Springs the 2-1 lead at the intermission. Pinedale’s Molly Murphy tied the game with a goal with 8:47 left in the third period. With just over three minutes left in the game, Lexi Harper would score what would be the game winning goal for Rock Springs. Pinedale pulled their goalie to try and tie the game, but Zoey Brown of Rock Springs would hit an empty netter with one second left to give Rock Springs the 4-2 win. Rock Springs goaltender, Kylynn Martin was “stellar” in net, according to head coach Russ Harper, stopping 34 of 36 shots.

Pinedale jumped out to an early lead in game 2, with goals from Cassie Miller and Molly Murphy. Zoey Brown of Rock Springs would score at the end of the first period, cutting the Pinedale lead to 2-1 at the first break. In the second period the two teams would score a goal each with goals from Seren Noble of Pinedale and Anabella Fausett of Rock Springs. Pinedale would hold on to their one-goal lead for most of the third period until Zoey Brown tied the game with about six minutes left in the game. “Both teams goaltenders were strong in net,” said Coach Harper. Pinedale’s Lilliah Tambourine stopped 19 of 22 shots, while Kylynn Martin stopped 41 of 44 shots for Rock Springs.

The third game started with Molly Murphy of Pinedale and Anabella Fausett of Rock Springs trading goals. Each scored two in the first period. The game was tied 2-2 at the first break. Rock Springs would struggle to find offense for the remainder of the game. Then Pinedale caught fire, scoring five unanswered goals including two from Cassie Miller, and one each from Seren Noble and Ellie Jensen. Molly Murphy scored her third goal of the game earning the hat trick.

Lexi Harper would open the scoring for Rock Springs with a goal off of a breakaway steal at the 10:19 marker in the first period. Pinedale’s defense would be stingy, not allowing the Lady Miners to score again.  Pinedale had goals from Cassie Miller, Ellie Jensen, Molly Murphy and Seren Noble. Both teams’ goalies again played well with Lilliah Tambourine stopping 19 of 20 shots for Pinedale and Kylynn Martin stopping 35 of 39 shots.

Next up for the Rock Springs Lady Miners are the Miles City, Montana, Lady Generals. The game will be played in Douglas on Friday, Jan. 29. Pinedale will host Sheridan on Friday, Jan. 22, at the Sublette County Ice Arena.